I do not really try for records or radio awards. I do not enter contests, though I do oblige a few people who ask for points. So I come on to VHF contests and give away my IO85 square, or this "rare" TD post code. I do not have any certificates, though I do have a laugh watching my eQSL prefix total mount up.

What I do challenge myself with is trying to eke the best performance out of the ionosphere.

There have been a couple of good Es openings on VHF at last. As yet none of the typical "large cloud over the Baltic and North Sea" type which gets me into Finland, Norway, Sweden, Denmark (well, Bornholm mostly), Estonia, Eastern Germany and Poland. There have been a few short openings into Poland and that one to Lithuania, but otherwise nothing in that direction at 70MHz. I worked LY again on 6 metres though. No OIRT broadcast stations heard on 70MHz.  Nothing West either, so I have missed USA, Canada, Azores, Madeira and Iceland (pretty wide range there, and Madeira would be a new one too). I have worked Madeira on some band - must check.

Lithuania have managed to squeeze a 70MHz amateur segment in between 70MHz broadcast stations. Very clever. Mind you, power is limited to 22W EIRP. If only places like Latvia, Belarus and Moldova could do the same. I know that it depends on exactly where their broadcast stations fall in the band, but it should be possible. Even if the result fell slightly outside the main European amateur band and involved split working, it would be interesting.

I wonder how my neighbours would react if I started running 22W EIRP on 99.7MHz? Frankly, as most of them either ...
(a) don't listen to the radio anyway, or
(b) if they do use DAB digital bands, or
(c) listen to podcasts on their tablet computers, or
(d) they use radio reception on satellite or Freeview digital TV systems ...
me running in between broadcast stations might go without notice.

The only places I hear 88-108MHz FM broadcast stations now are in the barbers, garage workshops or building sites. Nobody seems to listen at home.

I was also able to work S50B on 4 metres, which was good as Borut has read this blog. It is always nice to contact you all, the readers.

I have been busy on 6m, though there has been nothing really exciting on there. I have been on JT65, reeling them in. Lots of new squares but no new countries. On 6 metres JT65 I am often joined by Duncan MM0GZZ (IO85uu) and Alisdair MM0XAB (IO85wv). They are both within a 5km radius of me. Will anybody want to work 3 stations so close? So I tend to move to PSK, which is interesting too. No problems with that at all.

There was a good Es VHF opening yesterday (16 June). I was working in the shack, keeping an eye on the area covered by Es getting closer, as shown by dxMaps. My first contact was IK6GZM (JN62 1824km) on 6m JT65 at 16:41. I had a really helpful spot that I had been received on 4m on Sardinia, which is getting close to Malta and on the same bearing from here. I could work out that as 9H1CG was on 4 metres, so it should be possible to work him at some stage. Malta would be a new country for me on 4m. However, I decided that somebody else could do that for a GM-9H 4m "first" and I would have my dinner instead. Not competitive, me?

That was a pretty busy evening.

My Flex 1500 has returned from Norbert fully restored. He returned it after less than 48 hours. Excellent service.

Various components have been replaced including the antenna socket, the audio socket and it has been re-turfed to UK+ status, which gives me the full UK tx coverage up to 52MHz.

I set the Flex up on the 40m attic dipole and let it run over night. Power was 200mW running WSPR. As this would the fourth installation of WSPR on my computer, I decided to load WSPR-X instead. WSPR-X has a different look and feel, and has the bonus of having WSPR-15, a mode for VLF (!).

As I do not use the PowerSDR waterfall overnight, and it is not much help on 40m anyway, I put the WSPR waterfall in the middle of the Power SDR screen instead (you can just see WSPR2.21 running below WSPR-X on 10 metres).

As usual, click on the image to enlarge if you wish.

I think that was not a bad performance for 200mW and an attic dipole at just about the worst day for 40m in the year. I mean, we are near the Summer Solstice, and 40m tends to be a Winter band. Thanks to Bri and GF for suggesting that I should stick with the attic dipole. I would have put it outdoors, but keeping it in the loft and running 200mW seems to work.

Of course I heard a lot more stations, many using 10-14dB more power than I was. 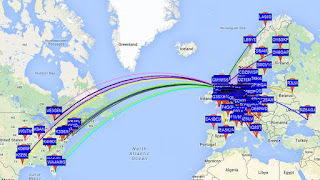 So, there is something to keep me busy during the Winter.