Sporadic E during the night.

Es is generally known as a daytime phenomenon.

This is not unexpected as it is caused by radiation from the Sun ionising layers in the ionosphere.

Bearing in mind that I am located at 56 degrees North, Es is an even more brief event than it would be further South where the Sun is more often overhead. Or, more accurately, more often overhead wherever the signals meet the E layer.

So I have to exploit it whenever I can.

At times of high daytime ionisation, it is possible for Es to occur quite late on into the evening, even up here. The usual times predicted in the books are something like "late morning" (here about 11:00 to 14:30) and early evening (18:00 to 20:00). Certainly nothing overnight.

As you might expect on 10 June there was ABSOLUTELY NOTHING ALL DAY - even every little on 28Mhz. They don't call it sporadic for nothing. There are days when nothing happens at any specific location. There might be things happening somewhere else, even quite close, but that is not much help.

If you need any proof that Sporadic E is a fleeting thing, after working Gianfranco the band closed in a matter of moments. 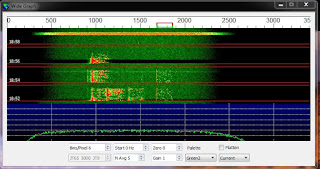 You can see on the waterfall the JT65 signal of F1MWV who went from big red mark to zero in a few seconds at about 18:56:20. It was like shutting a door. Signals that had been strong vanished in seconds. This is just an image of what VHF enthusiasts know very well: paths come quickly and they goes just as fast. You have to be a sharp operator to use them. I wish I was.

With the JT65 waterfall you can watch the band opening. In the middle of a transmission, you can watch another station rise out of the noise, and then possibly fall back into it later. Astounding. I am working on a posting about data modes. Well, several postings the way I ramble on about things.

Incidentally, the wideband mark further up the waterfall is me calling CQ on 70MHz.

So that might have been it, and certainly for most purposes the 6m band closed at 18:56.

I did work one station after this. I6WJB called me and this QSO resulted. 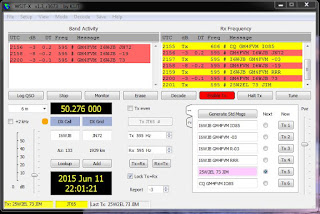 He gave me a report of -19, even after I upped my power to 75 watts. We made it all right but afterwards I wondered why this station was so strong and stable for a long period when the band seemed closed. I gave him -03dB, but he gave me -19dB. Was I really 16dB weaker with him than he was with me? Then I looked him up on QRZ.com and discovered he was running 1000W and has a good antenna system. I am sure his home-built receiver is very sensitive - he uses a 6m transverter, and we all know how good they can be (or so I keep saying repeatedly).

There is no doubt that loads of power and good antennas can get you through in this way, in a mixture of ionoscatter, troposcatter, meteor scatter and a bit of low-ionisation Sporadic E. It rather defeats the purpose of looking for Sporadic E, as I don't think that is what it was.

All that proves is that VHF is less "line of sight" than some people say. In the days before the military discovered they could use satellites, they routinely worked over long distances using high power VHF scatter modes.

I upped the power to 75 watts, but I did not have time to update my comment that I was running 25 watts (which was what I started with). One drawback of JT65 is that you do not have much time to compose your comments.. You have to prepare them in advance - 14 characters max taking a minute to send - and save them. That is why most folks don't bother with them at all. So I6WJB was not expecting me to send this cryptic message and he re-sent his 73 message. So that was a waste of time - it was wrong, and he did not understand it anyway.

JT65 was devised as a slow moon-bounce mode. It is not ideally suited to Sporadic E. It works well with if you have 6 minutes of stable conditions. It is good fun though.

Anyway, night time Es is not uncommon at this time of year. This takes two forms up here in the North, the first one is polar-type Es, further to the North of me. The polar stuff makes sense as the concept of "night time" is a bit crazy when you have constant daylight North of the Arctic Circle. Secondly there is residual Es carried over from daytime ionisation, which is in the usual directions (South from me).

There seemed to be a bit of Polar Es around, as someone posted on the DX Cluster that he was hearing the 6m beacon on Jan Mayen Island. I couldn't hear it then, but I often can during Polar Es events.

Recalling IU1DZZ reporting overnight Es a few nights ago on 10m, I decided to leave WSPR running overnight on 6m and 10m. I sometimes do this during the height of the Es season. At first there were a lot of spots from Finland and Norway. But after 02:00 it settled down to silence for almost two hours. Then ...

I have seen it busier than this, but it does show that the wee small hours are still capable of providing Sporadic E.

All this is me trying to show that my single day on HF - 24 hours on 7MHz - does not indicate any my intention to sit up overnight and work on the low bands. There is still plenty to do for me on VHF, even overnight. 40 metres is just a bit of playing around for me. It is interesting, but it will have to wait for a time when there is not a pile of things for me to do on VHF.