Before reviewing the year in general, it is worth considering the last few days of it in more detail.

That strange phenomenon "Winter Es" made an appearance on 28 December. I first noticed that S52OR was coming in consistently on the 4m meteor scatter frequency. Unlike the usual pings, he was there for the full 15 seconds. I quickly went onto FT8 on 4m and 6m. There seemed to be some action on 2m, but not here at GM4FVM.
This is my activity map for 28 December (click to enlarge the images if you need to, as usual). The two UK stations were on 2m, the others on 4m and 6m. 15 QSOs in 7 DXCC, bringing a total of 12 squares. ODX was SP8ALT in KO11GG at 1697km. The Winter Es opening lasted 61 minutes here. I suppose in the great scheme of things that is not much of an opening, but it brought a bit of hope to a very quiet scene.

The thing about Winter Es is that you never know if it will happen on any specific day. It keeps you on your toes. I missed out on the 2m part. Grrr.

Another dramatic opening was the tropo event on 29 and 30 December, affecting 4m, 2m and 70cms. Except that from a GM4FVM point of view it hardly happened at all.
You may notice from this chart that the event missed my part of Scotland entirely. The lonely pin over GM4FVM is just my alter ego, GM8JWG's short wave listener's posting. GM8JWG hearing GM4FVM does not really count as DX as they are both located in the same building.

The other remarkable thing about that slice of activity is that it is on 70cms. I thrash away on 70cms FT8 all year, and mostly it is a pointless exercise. There are contacts to be made, but nobody there to make them with. This clearly shows that many people have the ability to work on 70cms, but most don't do it. 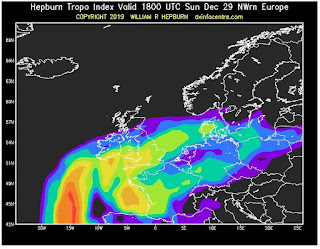 The Hepburn tropo predictor shows the centre of the tropo over the Atlantic with sideshoots over Southern England and France. Although predicted to make a glancing blow over Southern Scotland we saw next to none of it.

All was not lost though, and in a brief opening I did work some DX on 29th.
PA7MM and G8SEI were on 70cms, the others on 2m. As things go, that would be a good haul for me, but this was a day when stations on Central England were working Poland and the Canary Islands on 2m. A lucky few in the Southern parts of Ireland and England were hearing Capo Verde.

I spent quite some time trying to reach Fidel from Castro, EA1HRR, to see if I could reach a new DXCC on 70cms. Fidel has given me 6m, 4m and my first EA on 2m, so it would have been fitting for him to be my first EA on 70cms. No sir. He could work stations in G-land but not me, sadly.

The conditions continued on 30 December with G stations reaching all over Europe and I was on duty all day to work GW6TEO and GM4VVX. Both of those contacts were a real struggle but at 505km, GW6TEO probably had the choice of many more exotic stations to work than me.

I have been in touch by email with an amateur in the thick of it in IO82 square. He described to me the excitement of being in the middle of a huge opening. I am genuinely pleased for him. There is learning in this for me too. I have never been just beyond the edge of an opening before. Or, I probably have, but before PSK Reporter and DX Maps I never really knew what I was missing.

In the past I have described the odd feeling that during a DX tropo opening the "normal" tropo stations disappear. When I can work Poland or France the G stations in between seem to vanish. Well now I know what that feels like to disappear like that. While the G stations were working EA8 and SP, they vanished for me. The net result was that I could not hear the EA8s or SPs, nor could I hear anyone else. For hours on end I could hear nobody at all, on 2m or 70cms. Even if their beams are turned away from me, I can usually hear G stations off the back of their antennas. Not this time.

Enough whingeing. Sometimes you win some, sometimes you lose some. This time I lost. I will feel sorry for those just outside the tropo bubble next time I find myself inside it working tons of DX.

I will share their pain even as I am living The High Life, and Living It Well (sorry, 1994 Scottish TV comedy series reference).

Apart entirely from the radio, the three cycling Grand Tours were all brilliant, and the even the cricket World Cup was interesting. No, maybe interesting is the wrong word for cricket, people usually say "absorbing" instead.

Plus by train I made it to Wuppertal with its strange upside-down wobbly monorail, and even to the 2000 year-old Roman amphitheatre in Nimes
On the radio front there was the arrival of quite a lot of gear left to me by David GM4JJJ. Possessions are just that, and I would rather have had David still with us, but that was not to be. Excellent equipment it has proved to be too.

As for operations, the picture is of some things at FVM being the same, and some very different. The DXCC table of countries worked shows this:-
10m varies depending on whether I am using WSPR as normal, or sometimes FT8 which count as QSOs. The big drop in 6m DXCCx worked in 2019 is due to me only having a half wave vertical up, and trouble with my linear. When did I not have linear trouble? In 2018 it seems, but I must have been having trouble with a different linear then.

4m, 2m and 70cms are much as before, but 23cms is a new entry. I do not expect 23cms to provide much action in the next year but I am willing to be surprised. There is something to get sorted for 2020 - some more power on 23cms.

Also on the way is the return of a 6m beam. The new beam is past the design stage and it is now in the cutting metal phase. We shall see how that works in due course.

So an interesting year. Meteor scatter has not been very good. The Geminids in December seemed to be pretty poor. I am placing my hopes on the Quadrantids (or Bootids), this time due to peak on 3 to 4 January 2020. That leaves the meteor scatter diary free until April, but I shall strive for random contacts during the lull in showers.

The tropo opening of 29 and 30 December seems to be rumbling on still. There are suggestions that the barometric systems will continue to circulate nearby for about a week. As usual the Scottish weather is pretty variable and we need to see how this turns out.  It seems it was also affecting UK "Freeview" television signals in the 470 - 700MHz range, something that we do not see too often.
https://www.bbc.co.uk/news/technology-50945421

What does the future hold for this part of the world? Well, I received a parcel by Royal Mail today from Uxbridge near London. On the back was a UK customs declaration. Has Scotland already left the UK and nobody told me? Is this the present or is this for the future? Do I need a new callsign? No comment necessary or welcome on that debate, let us stick to radio here.

Ah well, the future will reveal itself when it is ready.

Have a merry Hogmanay and a great New Year.