Just a bit of fun

I think this hobby should be fun. It should not be all about understanding Faraday Rotation or precision frequency measurement. Sometimes we should just leave the work to one side and do something for ourselves.

The thing I left aside is a posting on this blog about how to tell the difference between the various VHF propagation methods. Stirring stuff. Like many of my postings it is far too long, too wordy, too ... too much like hard work really. They must be a right pain to read.

For a few days the barometric pressure has been rising as an anticyclone passes across Britain roughly from North West to South East. 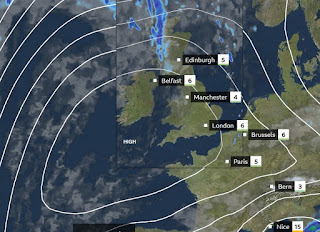 There was a weather system across Scotland which was likely to spoil things a bit, but for about 5 days the Hepburn Tropo Predictions (see link on sidebar) have been suggesting that yesterday, Tuesday 3 December 2019, would be the day when VHF and UHF conditions might improve.

So I set Tuesday 3 December 2019 aside as a day to work a few stations and see how I got on.

I really enjoyed it. Good fun.

The significance of Tuesday is that it is the "Activity Contest" day in Europe. Well, it was, until we started having 6m and 4m activity days on Thursdays, which is a good idea but does make it all more complex. This was done because, despite the constant nagging from contesters, the national radio societies were unable to fit six Tuesdays into every month. Those national societies - what good are they if they cannot regulate the number of Tuesdays in the month.

First Tuesday in the month is 2m activity contest day. Now, as is well known, I do not enter contests but I do give away points. So the plan for this Tuesday was to operate as much DX as I could if conditions were good during the day, and then help out in the contest for even more DX during contest hours.

The RSGB National Activity contests run from 20:00 to 22:30 UTC for all modes, with earlier contests from 19:00 to 19:55 for FM and data modes. However, as conditions were looking up, I decided to switch to my favourite contest, the Nordic Activity Contest (NAC), which runs from 18:00 to 22:00 UTC on Wintertime Tuesdays (switching by an hour during daylight saving time).

For this contest I decided to stick to FT8. As many of the NAC stations use FT8 in its European contest mode I can get a useful updated conest log on WSJT-X which saves me trouble checking for those stations I have already worked.
Interestingly the latest entry in the log is at the top numbered one, whereas the serial numbers (which I have not managed to capture in the above screen grab) go the other way.

The signal reports used in the European contest mode are "59" type RS strength reports with a serial number, rather than the conventional FT8 "dB S/N relative to the noise in the SSB filter" type reports. If presented with a Euro contest type report WSJT-X will switch over to that style until you dive into the settings and turn it off. Using two different styles of report in two contests running at the same time causes endless confusion to those in the RSGB data contests which do not use serial numbers or the Euro contest system. It all adds to the fun.

I like the NAC because of its informality. It also helps that the stations involved are usually at a handy distance if conditions are good. Often I can use meteor scatter, but perhaps this time tropo would be good as the high pressure seemed to be perfectly placed. Tropo openings are often best just as the high pressure is subsiding, which it obligingly did.

As usual, click on the images if you wish to enlarge them.

As the NAC on the first Tuesday of the month is for 2m I did concentrate on that band, but I did some 70cms too. You don't need a contest to make UHF DX interesting, but sometimes it helps.
Before the NAC began I worked 18 stations. On 144MHz it was 14 stations in 8 DXCC, on 432MHz it was 4 stations in 2 DXCC. I only worked France on 432MHz (twice), the others on 144MHz being G, GM, GW, GI, OZ, PA, DL and ON. ON4POO kicked the whole thing off, as he so often does. The two stations in France were F5APQ and F4HRD both in JO00, which isn't bad on 70cms at about 600km from here. I bet I could have worked more stations on 70cms if there had been more around, and of course during the 2m contest the 70cms activity fell (but did not stop!).

During the NAC I worked 10 stations in OZ, LA, and SM of course, plus PA0O as yet another participant in NAC. I was only on for about 2 hours of the contest as I had to go and watch "Masterchef The Professionals" on the television. We have to keep it fun you know.

I am not sure if 70cms contacts count double the distance but they should. Two other contacts that got away were both GI6ATZ, heard on 70cm and 23cms. Either would have been an interesting QSO, and on 23cms a new country for me. However, as the contest was underway I left him to it.

So, I did not enter another contest. I just did some operating. Including a contest is easy when you do not have the keep any records for your entry and it does not matter much if you slope off to watch the telly for a couple of hours.

There was nothing special about 3 December 2019. It was just a chance to work a bit of tropo with the activity level which comes with the contest.

Along the way I did nip outside and change over my 432MHz masthead preamp. I have done this several times over the past 6 months and I have honed the time down from an hour to just 27 minutes. It is getting like a Formula 1 pit stop. I need to work out what is happening. Perhaps that will not be so much fun as a day's operating.