We have been off on our travels again
A week's holiday in Taynuilt near Oban provided an opportunity for some GM4FVM/P operation from IO76.

I think IO76 is a rare square because I have never worked it on 6m, only once on 4m and never on 70cms. A dipole, which was all I had for 4m, works quite well during an Es opening - but we didn't get a 4m Es opening. The same dipole, shortened, did good work on 2m tropo, and I did quite well on 6m using a ground plane antenna too. However, even with tropo looking to get better, I decided about half way through that it was supposed to be a holiday and I had better knock off the radio.

The day before setting off for Taynuilt, Sue and I visited David, GM4JJJs, shack and met Pat again. Long before David became Silent Key he had asked me to accept various - specific - items of equipment. He had carefully worked out what I would be likely to need. In fact, he divided up lots of equipment and passed it on to several amateurs.

Peter, GM8GAX, was undertaking the task of sorting everything out, packing it up and clearing David's shack. That is a difficult job, and Peter had plenty of work to do. Eventually we headed back with boxes of gear, all of which will be much appreciated. I have plans for all of it.

It was immensely kind of David to pass on all his equipment to fellow amateurs like that. It is also very kind of Pat to make sure David's wishes were carried out. Peter has done a lot of work to make it happen. I hope to be writing about various bits and pieces as I use them. I was using the excellent YouKits antenna analyser to set up the dipole in Taynuilt.

This exercise has been a shock for me, even though David had told me a long time ago that it would happen. Indeed, he wanted to be sure that everything found a good home. I agreed to be part of it all, but that doesn't mean that I am without doubts. I just wish it hadn't been necessary. I wish David had more chance to put it all to use. It is hugely generous of him, but it is also a sad day for me to accept all of his generosity.

I know that David would want me put this gear to use and that is what I intend to do. I do feel sorrow about the way I have come by it, but I will certainly follow David's wishes. I considered David a friend and he obviously felt the same.

How different all this has been than the other SK's distress sale ("Roland") I have been posting about.

I was never short of gear, and I certainly have plenty now.

The circumstances could have been better though.

My feelings about all this are troubling me, but maybe we will stop dwelling on them here on this blog.

Peter also passed on to me this QSL card which he found when clearing the shack. It is for a contact with David (who was then GM8HEY) in 1977 ... 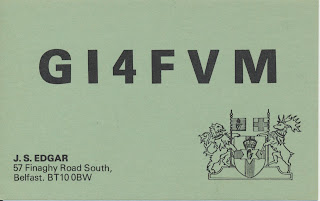 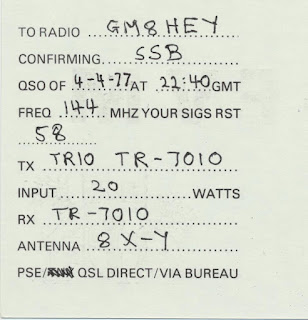 There was a nice 2m Sporadic E opening on 2m on 2 July. This being the first Tuesday in the month, it was RSGB Contest evening. Never having entered a contest, I still feel that it is helpful if I turn up occasionally and give away some points. There have been times recently when IO85 was a rare square ...

I decided to spend 55 minutes on the "144 MHz MGMAC", a short contest mostly involving FT8. During the second half of the event I heard several stations in mainland Italy and Sicily but no contact resulted. Then, between 18:51 and 19:13 I worked five Italian stations, best DX being IT9PQO in Sicily (JM78, 2328km). As well as JM78, I also worked two stations in JN61 and one in JN52, bagging two new squares. It surprised me a bit that working IZ5IOR in JN53 did not bring a new square. The key to this is that JN53 is only 1618km away, and close enough to have worked on 2m meteor scatter.

Looking at this more carefully, I was surprised to find that I have worked Italy 16 times from here on 2m, but only 10 are on Es (and only 5 before this week). The other 5 are on meteor scatter with just one on Earth- Moon- Earth.

Italy is an elongated land mass along a series of fault lines in the Earth's crust. The operative word here is "line", as the geology has created a long line of mountains down the "spine" of Italy and by some fluke this is aligned almost perfectly in line with the path from the UK. Thus with Italian stations being organised along this line, from 1400 to 2400km, there is often a chance to work them. Put simply, Italian stations are where Italy is, and Italy spans a huge number of possible paths due to the alignment of its landmass.

The famous "Italian wall", which some amateur complain about, is not due to some strange propensity of Italian stations to operate all the time, but rather due to the peculiar geography. There is often propagation to some part of Italy because of the large range of distances from the UK. To pick a fairly random comparison, Austria is also elongated, but more at right angles to the UK. Thus Austrian stations don't all seem to line up along the same beam heading, and so you don't hear so many of them at once. Denmark is almost perfectly on a right angle from here and I do not often get several stations at once from there, and much the same goes for Finland. Luckily I do not often need a beam heading for New Zealand as they are in just about every direction you could imagine (maybe that is why I have never worked ZL, unlike Italy. Could the distance be a factor too?)

The UK must seem similar from the Italian perspective, but not quite so long or so nearly in a single direct line. In addition, the distant parts of the UK are different DXCCs. Being able to hear G, GD, GM, GI, and GW in one opening would be quite good fun. In Italy's case, only Sardinia is a separate radio entity.

Viewing the day's 2m activity on a map it looks quite clear ...
We can see clearly in this image the basic characteristics of a 2m Es opening. The distinction between the "flat band" tropo activity - best DX G3YDY, JO01, 493km (nice contact for tropo) - and the Es into Italy is easy to see. The Italian stations are arranged in a line from my perspective. The Es opening only lasted for 22 minutes so there was no time for the Es to shift. 2m Es openings are rare and short. The distances were, in order of contact ...,
at 18:51 2328 km,
at 18:54 1886 km,
at 19:02 1736 km,
at 19:03 1877 km, and finally
at 19:13 1618 km
The tendency this time was for the DX to shorten over time, which suggests that the ionisation was increasing. This of course relates to a tiny part of the ionosphere over those 22 minutes - other parts might be behaving differently.

There might, of course, have been other areas of ionisation nearby. When you look at the map, just a tiny bit West and the opening would be into open sea. If the path opens into areas such as the Alps, the Atlas mountains or the Adriatic Sea then there isn't much to work.

You have to rely on an amateur being active in a small area of land (hopefully not sea) - an area which is rapidly moving North in this case - on your frequency and mode, and at the time the opening occurs. Each station was only heard here for a couple of minutes. It is surprising 2m Es openings happen at all. You do rarely get long-lasting ones, but they are unusual.

Just for comparison, the 4m and 6m Es opening of the following day was a more leisurely event. Or perhaps I should say "events" as they took 8 hours and 3 minutes to complete. During this time various paths opened up and closed again. For this purpose I will look only at the 4m ones, though the 6m ones lasted even longer and featured multi-hop openings which I did not try to join.
The contrast in directions worked is considerable. I first worked 9A2ZM at 13:29 during an opening to the Adriatic which lasted 9 minutes and was a bit like the previous day's 2m opening. The difference is that at 4m I could reasonably expect more openings later that day. On 2m the next Es opening could well be next year.

There wasn't long to wait, as I then worked EA2XR at 14:22. That sort of thing is fairly common on 4m, whereas having a second opening in a different direction would be unusual on 2m. It was not until 19:29 that 4m opened again - or maybe I was just not the shack. Life comes before radio and I cannot sit about listening all day. That opening lasted about an hour and I worked three stations - there are not may folk about on 4m. I hung around on a hunch and ten minutes later EA8DBM in IL18 (3278 km) appeared to round off the day. Almost as far was EA6SX in the Balearic Islands, but that proved to be a rather scrappy contact. I was finished at 21:32.

So how do we compare a few minutes on 2m to work one country and 4 squares, with half a day on 4m to work 5 countries and 8 squares? Well, 2m Es openings are vanishingly rare here. Those stations further South than me generally do better. But I like the steady progress on 4m, with each phase of the opening having its own character - EA1VM was a new square (IN72) and 4O6AH was both a new country (Montenegro) and a new square (JN92).

Nope, it is not really the "goodness" of an opening I like. I do not care much for the comparison between them. It is all good. I love the uncertainty. The periods of listening to white noise before the band opens. You have to work quickly as you might only have minutes. Which way to beam? Can I go up a band - if it affects 6m, is it present on 4m, or even 2m? Is my antenna as good as it could be? And, of course, the glory of watching the ionosphere doing its thing.

And then the opening gets "better". Further. More stations. And then ... it is over. Gone for another year/ week/ day. They always get better just before they stop. No point calling CQ now Jim, you've missed the best bit. The fish that got away. Like hearing San Marino (actually "The Most Serene Republic of San Marino"), not calling them, and then never hearing them again. Not very serene after that one. Add Egypt and Lebanon on 6m to the list of giant fish that got away.

Ah, the joy and the pain (Frankie Beverly and Maze again). It's Rainin' Through My Sunshine (wasn't that the Real Thing? I went to see them at Ballymena County Hall in 1981 but I cannot remember them singing that).

Nobody said radio should be easy. It is the random nature of it that makes it interesting. It's great and then it is over. I love it, both when it happens and when it does not.

Treasure the good radio days, and treasure your radio friends too. We are all sporadic, over before we are ready to stop.

To finish, here is the view at Oban, where we went in the train from Taynuilt. I bet that Sun is doing some ionising.

As usual, you can click to enlarge any of the images if you want to.