My recent comments about the IC-9700 were a bit enigmatic - you can find them here ..

I had noticed that it had an issue with the PTT output which would be a problem for me. Anyway, it put me off buying one, but now I have one so I need to check it out.
As with any new rig which had never been out of the box, it needed to be set up. In this case the key element is to update the firmware. So, once it had been connected to a computer by a USB cable it was easy to do the update. In this case it is update Version 11.

Firmware update Version 10 had already added the possibility of using a GPS-locked frequency standard. It surprised me that the 9700 was initially launched with a 10MHz input on the back for use with a GPS or similar frequency standard, it then left the settings so that you had to reset the frequency manually. Version 10 update revealed that Icom could change the firmware to make this correction automatic. With a rig which can operate on 1296MHz I would have expected the automatic correction to be available from the start. This was a surprising marketing mistake by Icom, and when put together with the fact that the radio only has one PTT output for all bands, it suggests that Icom got the launch wrong.

Never mind, the frequency standard problem has been resolved in a firmware. Modern SDRs can be reconfigured in this way. No need for a physical alteration if you can do it over the internet. However, there is no simple resolution for the PTT issue. This limitation will not present a problem for anyone not using linear amplifiers. However, the output devices in the 9700 are working fairly near 100% of their rated output, so linear amplifiers are not a bad idea, even for a limited gain in power. I remember early buyers of the IC-9100 experiencing blown output stages - but then many rigs have that problem.

To make the frequency stability solution work, of course, you need to add an outboard frequency standard. I have one already - my ancient Trimble Thunderbolt. This still works but has several downsides. Being old it is not configured for the latest satellites and it needs a USB connection to a PC. The OCXO on mine is old spec too, though it is possible to fit a better one.

The Trimble Thunderbolt issue is a common problem for me, and no doubt other amateurs. It is a nice piece of equipment, high spec when new and well ahead of its time. Mine was ex-equipment, via eBay and the Far East when few amateurs could afford them new. They cost £1000s new and 6 or 7 years ago I was glad to get an old one for a fraction of that. These days you can get better ones new for less than I paid for mine which was very second hand. So do you sideline your prized chunk of old tech, cut your losses, and buy a vastly better, smaller, more efficient modern off-the-shelf marvel? Or do you stay in the dinosaur world where people lie in wait to entice you back into valves, AR88s and the joys of mechanical teleprinters?

I could use the Thunderbolt for the 9700, or just keep it for another thing it is good for - regulating the PC clock. I guess it would be better to buy a more modern frequency standard, such as a Leo Bodnar one, for the Icom. Not only is it likely to be more accurate with less phase noise, it only needs the PC to set it up - after set up it runs independently.

Apparently the drift problem stems, not from poor ventilation inside the 9700, but too much ventilation. It is supposed to be fine until the fan cuts on, whereupon the airflow cools everything so much it induces drift. So far, with me only drawing a couple of watts from it, the fan has not turned on.

So enough about all this. I recall all the issues with the IC-7100 at the start, and eventually I took some simple action with the main one, ignored the rest, and I am still using it six years later. 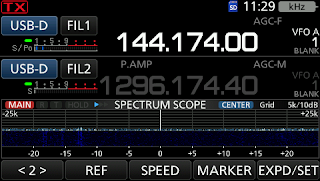 It is far too early for me to comment too much on this rig. I hope to do a review later. For now, I do not even have an antenna for 1296 MHz. To put one up I would need some expensive coax, and right now I am holding back on that.

When it comes to reception on 2m it is superb. As you might expect from an SDR the receiver is surprisingly quiet. Sensitivity is good. The comparison I will try to make is between the 9700 and my IC-7300/ME4T transverter combination. Essentially the transverter arrangement is capable of moonbounce though I do not have proper EME antennas to make that much use. Can the 9700 also manage on moonbounce? Perhaps we shall see. In any case, first acquaintance looks promising.

I have also tried it on 70cms, though only on receive. Once again it sounds quiet. I think I can say it is better than the IC-7100, but you might expect that. I missed the chance to try it on the recent 70cms contest, so the jury is still out on that. As I have only used receive the fan never came on and the frequency stability never varied from excellent.

When it came to trying this rig on data modes I had the familiar problem with any new Icom transceiver - the Hamlib library used by WSJT-X has not been updated to include it. I had to trick WSJT-X into thinking it was some other model of Icom rig. This is not a problem with other makes of gear as they use the straight CAT protocol, whereas Icom use a specific CI-V coding for each model. Of course, being a radical new thing, it was rather difficult to find a similar rig to give as a temporary identity to the IC-9700.

Thinking that the IC-9100 might be a good place to start I quickly found that the Icom SDR rigs have a different TX instruction. That meant that pretending to WSJT-X that the 9700 was in fact a 9100 would produce full functionality in my mind. Back in the real world, it didn't work. Strangely the IC-7610 set-up did not work either. So after an awful lot of fiddling, I changed the settings so that WSJT-X thinks that the 9700 is an IC-7300. That way I do not have full functionality but at least it works partially. The software can tell the rig to use 144 or 432 MHz, but it gets confused with 1296 (which is hardly surprising). Never mind, I can now use WSJT-X. Once WSIT-X is updated with the coding for the IC-9700 I can change it back to default.

Another solution to the Hamlib problem would have been to use MSJT software instead of WSJT-X. While I was struggling to get WSJT-X to work I did indeed use MSJT and it works. I find it hard to adjust to MSJT. I cannot fault the functioning, but the user interface just doesn't suit me. There are lots of little things like the fact that WSJT-X continues to finish a TX segment unless you press "Halt TX", whereas MSJT just cuts you off in the middle of a TX period when you ask it to stop a sequence. That sort of thing makes a difference when I am busy. Anyway, MSJT works folks, and it is another work-around.

Very early verdict - I like the IC-9700. I will add some sort of frequency standard at some stage. It has a great receiver. It has lots of TX power but I am not sure it is a good idea to run it flat out, either for the PA devices or for the internal temperatures. Have I understood both manuals yet ?? - NO. Have I tested it fully yet - No, probably about 15% of its capability. But already I like it.

EDIT this next PTT isue has been resolved for me by the DX Shop PTT multiplier - see here.

To return to the PTT thing finally, I wrote about this before and suggested that somebody (me?) could make something to resolve that problem ....
=============================
The CIV box I have in mind has a simple CIV decoder (maybe an Arduino) and 3 relays (or solid state switching). It just reads the CIV and switches between the relays to select the PTT. No need to sense the PTT from the CIV as it comes out on a different pin on the same socket as the CIV does. Three LEDS on the box to show which one is selected and as a fail safe all three work if the box loses the CIV signal.
Timing and sequencing are not an issue as the PTT is still controlled by the DC line coming straight out of the rig. All the relays do is to switch it about.
=============================
I wrote that when this was just a thought. Now I have an IC-9700 maybe I have to get into gear and do something. So I dug out the CI-V protocol and there is plenty to read there. Eventually I have left it for some future date, but such a thing would certainly be useful in other settings.

It is only 5 weeks since I wrote about matching the IC-7300 to the transverter. I did not expect to have an IC-9700 today but I have. I had better get on with it but at first glance the 9700 appears to be excellent.