It had to happen.

Someone who built radios at age ten, learned computer coding at 18, has built his own computers for 25 years, computer controls his rotator, runs a radio blog and even sometimes solders things together cannot continue to use a paper log book.

It finally became painfully obvious that things could not carry on last month. A couple of years ago I wrote a database program to keep track of my countries and squares worked. This was fine until I came to extend it to 6 metres. The process involved ploughing through log books, working out which contact was important, and entering details. Then it occurred to me that his was a waste of effort. If I had a system that included all the likely contacts then I would not need to do double entries, and it could work out what was important based on filters I entered myself.

Plus my memory is not what it was. For example, I discovered that I am capable of forgetting entire VHF openings, and for that I blame the fact that there are more and more openings to recall as "Time Marches On". My memory must have some finite limit. And the ultimate issue - this is a hobby. It should be as simple as it can be. Trying to store information on bits of paper and remembering specific openings is not a good use of my organic storage.

I could not ignore another great pointer either. I became self-employed in 1999 when my employer kicked me out on account of my failing health (I suspect their pension scheme did not expect me to be alive and kicking for so long). I took a spreadsheet which I had used to keep track of my non-employment earnings and expended it to cover the increasingly complex ways I earned my keep. Between 1999 and 2016 this grew and grew in complexity. But it was a product of its era. In 1999 I wrote it in Lotus 123. The fact that Lotus 123 still runs on Windows 10 is a bit of a surprise (the associated database stopped working years ago). But I had to admit that 123 no longer meets my needs, or at least the 1999 version doesn't. So, regretfully, I re-wrote it in a more modern format. Last week I did my 2015-2016 tax returns which are the last based on  accounts held in 123. Anyway, now that I am more retired than working my accounts are simpler.

Flags at half mast, end of an era. I just have to accept that MSDOS is dead. If only RTTY would go the same way.

So I have all the proof I need to show I have to move with the times. VQLog seemed the obvious solution as EA6VQ already provides my lifeline with DXMaps. Also, the great and the good of the VHF world already use VQLog. You can find VQLog if you follow the link on the sidebar to DXMaps and click on "Software" and then it appears on a drop down menu. I tried out the sampler version for 6 days before buying the supported version.

Unfortunately VQLog does not seem to do tax returns as well.

So more of that later but it has taken AGES to capture all the contacts I feel I need into the software.

D'oh. Maybe I should have changed years ago. But would I just have written my own log software in Lotus, or Quicken, or Scribe, or some now entirely defunct package? Probably.

At least now I am able to use logs from WSJT-X and HRD-Log to fill some of the gaps. Also, I can use my existing database information to identify the key contacts I need to enter. There are just too many of them. I am only covering my period at this QTH, about 8 years, as I re-set my logging clock when I moved here from G-land.
================
Well that is why I have been fairly silent on the blog lately. I have been too busy pressing keys.

I did find time to visit the Cockenzie and Port Seaton Club "Junk Night".

They really need a better name for it. I have seen it called a "mini-rally" which describes it better.

Anyway, the highs of Cockenzie are always the people you meet there. You always encounter like-minded individuals, people you knew from years ago, and others you just bump into. Then there are long conversations about common interests and radio problems you share. Usually there is a bit of belly-aching from me about the world in general. Actually buying and selling things comes last for most people.

I was surprised to be approached by Jim, GM4DHJ. Surprised because he reads this blog. How he recognised me is a bit of a mystery, but he did. We had a good blether about lots of things and it was great to meet him and his XYL. I did rather take over their stall, but then maybe selling things was not the only purpose they had either.

It says a lot about the spirit of these events that you can go along with nothing particular in mind, then meet people who you can talk to for ages. 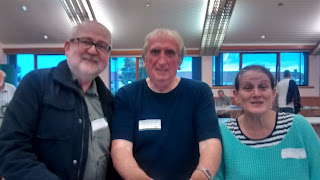 Me, Jim GM4DHJ and Jim's XYL

It is a casual get together with some trade stands, a raffle and a very fine array of snacks and filled rolls. It is clear to see that the average age of the amateur in South East Scotland is getting higher. They are also getting heavier. At least the Cockenzie and Port Seaton club takes a sensible approach to training new amateurs of all weights. If only my local club would do the same.

I looked long and hard at two second hand (used) VHF rigs. One was a pretty ancient 2m one, and the other a more modern synthesised one which included 70cms. OK, the old one will be deaf by modern standards but I have a nice pre-amp. It is a pity that dedicated VHF rigs are no longer made by the main producers. I understand the economic arguments that brought this about, but from a technical point of view surely a single band rig must be capable of being better on a specific band than a multi-band one. Which I guess is why so many VHF enthusiasts use transverters. Anyway, I did not buy either of them.

Those were the highs. Now for the lows. What could offend me about this item for sale for £15? 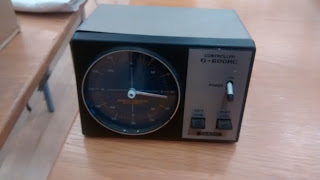 It is a controller for a Yaesu G-600 rotator. The RC version, just the like the broken one I have.

Well, as I went into in some detail earlier in the blog, when my controller packed in I thought it was be impossible to replace. I bought an EA4TX ARS-USB controller, and very fine it is. But the computer controller was over £200. I feel pretty sure that I would have gone for this one had I known it was around. Bah. I could have spent the £185 on any number of things.

Not really a junk sale when it has useful things like this in it. I didn't buy it!

As was discussed earlier down this blog, I repaired a break in the switching circuits, or rather duplicated the 13.8V line to the switching panel, bypassing a break in some unknown place buried under the circuit board.

This was not quite prefect. The switches were not working correctly - the amplifier switch worked the preamp, the preamp switch did nothing. The whole thing could not be switched off using the switches. I had routed my extra wiring round the side of the board, thinking that the original path under the board might have been to avoid RF pickup.

Sure enough, it was picking up RF. This was not a problem with data modes, but with SSB it was showing a little bit of distortion and making a very odd noise. So I sidelined it.

At this stage I must admit to a habit of not going back into something after I have worked on it. I find it very hard to re-open things and go back over something I have done before. So the 0552G sat in the corner of the shack for several weeks until I found the energy to fix it.

I had two plans. Either, Plan A, I could find a way to insert the 13.8V more directly onto the board and cut out the long wire I had installed before. Then, Plan B was to replace my long bridging wire with screened cable. Plan B was a bit of a shambles but if it worked then it would do. Plan A was the one to go for, and maybe I could find the right track on the circuit board and get the switches working properly.

Once inside, it turned out that a variant on Plan A would work. There is a track on the board taking the 13.8V from the main "amplifier in" switch to the RJ socket in the back. It passes right past the main 13.8V input. So I used just a couple of centimetres of wire to bridge onto that track and, wow, the RF pickup stopped. No need for Plan B, which might not have worked anyway.

I forgot to take a photo and I am not about to open it all up again to take one now.

So my additional wiring is now about 450mm shorter than it was, giving less scope to pick up RF. Maybe that is why the original track was under the board. Anyway, the switches still don't work properly, but the way they work has changed. The preamp switch now works the preamp! Hooray. The "amplifier in" switch also works the pre-amp, but does not turn the whole amp on or off as it is supposed to. That is because I have wired the supply to the "wrong" side of it. But that is better than it was before and I can turn it off entirely by just cutting the DC supply from the power supply.

Speaking of the power supply, it turned out that it was making some of the odd noises I had blamed on the TE Amp. It is a "MyDEL MP-50SWIII", stated spec 50 Amp 13.8v PSU. They are available under many names all over the world. Mine creaks as you draw current from it.

It seems to work perfectly well. The odd thing was that it added noises to the clicking made by the 0552G. So now that the linear is fixed and silent, I can hear the creaks from the PSU.

These odd noises do not help my paranoia. Maybe the KGB have put a bug in it, so that is why it creaks. They want to know why I have a 70MHz meteor scatter QSO with the same station in Denmark every week.