All those USBs, Mixed Sporadic E and a 10 hour QSO.

I have spoken before about all the USB sockets and plugs in the back of my computer.

I happened to read this blog
http://www.the-amateur-amateur.com/
the day after I had tried to sort out similar problems myself (it is his August 2016 posting).

Like Gary I also have had problems with an add-on USB-3 card failing to recognise USB connections. This seemed to happen a random and resulted in various crashes and sometimes damaged discs when the whole thing ground to a halt in an uncontrolled way.

A bit more investigation revealed that one PCI-E USB-3 extender was causing the problem. In fact, when I thought about it, I have similar problems with several USB-3 expansion boards over the years in various computers. As this PC is from the USB-2 era, the only way to get a USB-3 socket is to use one of these boards and I need USB-3 to do my backups in a timely fashion.

So I bulked up my USB plugs as best I could onto the existing USB-2 board and the motherboard sockets. That still left a need for a USB-3 extender. This sometimes failed to be recognise plugs. I tried to put things on it which did not matter so much. these could wait until they decided to join us, maybe a few minutes after booting up, or sometimes not at all. But there are only so many sockets, and one of the rigs or data cards could not be left off for a time, nor the keyboard, mouse etc. Eventually the pitfall of this system was the EA4TX rotator controller. I could hardly operate without turning the antenna sometimes. There was no other free socket to use.

Now we get into the nitty-gritty. This "low profile" computer (called, imaginatively "Office") has only one PCI slot and two PCI-E slots. The PCI slot has a 5 socket USB-2 card in it and it works 100% fine. The USB-3 card is in one of the PCI-E sockets and a Sound Blaster board is in the other one. I need to keep the USB-3 one just for the backup disc. So I need to sacrifice the Blaster board for more USB sockets, but I cannot trust the PCI-E extension cards. I have had three and they all failed to recognise the sockets at some time of other, often with nasty results.

So I went back to the drawing board. Why have I got to install a board with circuitry, driver and the potential to go wrong when we used to do this more sensibly? So I bought a dumb set of USB sockets from Amazon for £3.53. 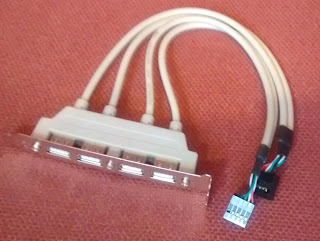 I like solutions like this. The fancy PCI-E boards may be very good but they are complex and evidently often fail to work reliably. This device is just a pair of plugs, some wire and a pair of double sockets. It plugs directly into the motherboard. You can also get USB-3 versions too, but my Office motherboard does not have the right sockets. And I not only save some power drain and a thing to go wrong, I save another oscillator circuit to make noise.

I have used the two socket versions of these adaptors in many computers over the years but it had not dawned on me that I could use one now. What might seem old-fashioned may also work. They have proven to be completely reliable for me so far over years of use.

All you have to check, and this important, is that your motherboard has the right sockets. Certainly my two Asus boards do, and my Gigabyte whizzo fast machine has USB-3 equivalents.

OK, I still had to lose the Blaster sound board as I need to mount the sockets where that would normally be. However, all my rigs now connect by USB (hence the need for the sockets in the first place) and not by analogue audio connections. The IC7100 and the 7300 create their own virtual audio ports. The FT-450 and 817 connect via the ZLP interface which does the same. So all I need to do "audio-wise" is to find a home for the 3.5mm audio jack for the PC audio - and a cheap USB card does that. It uses one socket, and the items moved from the USB-3 board fill the rest. There we go - 4 sockets on the motherboard, four on the PCE card and four on this adaptor. Plus a USB-3 socket on the unreliable PCI-E board.

Everything is now running smoothly.

Amazon said when I ordered the sockets (25 July) that they would arrive - from China - between 3 and 23 August. That did not inspire confidence. They arrived on 2 August.

Low tech solutions often work. This one does. My rotator now works as soon as I boot up, as do the printer and scanner, which previously were unknown quantities depending on whether the USB-3 board would remember to connect them. And the USB-3 board - well it can join us now when it likes.

By the way, here is an image of my first computer (well, first if you ignore Sinclair ZX-81s and ICL main frames) ... 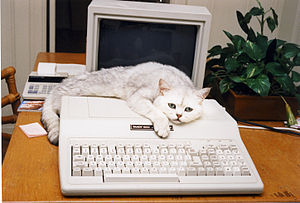 Minus the cat of course. This was sold to me around 1990 by a notable radio amateur. I pointed out to him recently that it has since failed. Mind you, it did have a 7.16 MHz processor and 384Kb of memory. It came with one 5.25" internal floppy disk drives. This current "Office" computer has a processor running at 4.2 GHz and 8Gb of RAM and it is in fact the lowest spec of my three desktops. And it does not have a floppy disc drive. But then the Tandy had no USBs, which had not been invented then. Maybe I have to accept that the Tandy is past its expected useful lifespan.
========
The geomagnetic storm produced by the recent coronal hole has continued for three days, producing good Es every day (usual space here for derogatory comment about Es predictions based on jet streams). This is what this coronal hole looks like. 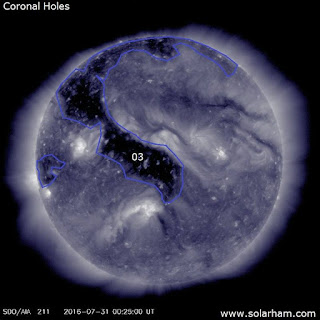 So far we are into the fourth day of high speed solar wind and raised X-ray levels.

Day 1 I have already reported on. Day 2 created a large Es opening over most of Europe but I only had one contact (and an unfinished one - see later). Day 3 was very nice and I am writing this in Day 4.

On 4m I worked Czech, Croatia, Poland and Hungary. Despite the total I reckoned that signal strengths on 4m were lower than I expected. At one stage I had to go out to see the doctor and I decided to leave the mast cranked up. I usually crank it down if I go out, but this was short visit so I reckoned I could leave it up. Later on that night I went out to lower the mast only to discover that it had been down all day. Lowered both when I was working 4 countries and also while I was at the doctor.

No wonder I was not getting anywhere on meteor scatter. My antenna was pointing straight at the wall of next door's house.

The 6m antenna is on a different mast so it was not affected.

The whole QSO took 10 hours 49 minutes to complete. I cannot count it as breaking my longest QSO (3 hours) as my transmission was not continuous. But as he came straight back with a report, do you think that he was there for the whole night, calling me? Maybe.
========================
The solar wind and Bz factor are all still high enough for an aurora, though we have just had excellent Es. There have been a few auroral contacts, but none here so far. I am still hoping that it might tip over into an aurora at some stage over the next few days.