Getting started on VHF DX

This is a basic introduction for those who are interested in what happens at VHF but who have yet to take the plunge.

It assumes that you have already dipped your toe into VHF via some FM operation, and you have a VHF rig or might buy one which has VHF bands.

It used to be so easy. In my day, my licence only allowed me to operate on 144MHz and above, so I had to. And then to begin with, there was only one rig - the "Belcom Liner 2". Before the Liner 2 you could use an HF rig with a transverter, a complex and expensive solution. Then in about 1973 the Liner 2 appeared which offered 2m SSB in a single, dumpy, heavy, awkward box. It also did CW, but the "Class B" licence did not allow me to use CW (and no doubt created my life-long fear of the CW mode).

There was this large pool of enthusiastic Class B licencees, and suddenly there was this rig. So hundreds bought Liner 2s and went up hills. And as the Liner 2 was awful (it has been called the worst rig ever sold) things were a bit fraught, especially when people started trying to increase its 7 watts or feed amplifiers.

After a while the big three manufacturers followed suit. I bought the Kenwood offering - the Trio TR-7010, which had the SSB bits from the (about to be released) TS-700 multi-mode 2m rig. Yaesu had the FT-290 and Icom the IC-202. These rigs were all aimed at different segments, but the one thing they all had in common was that people took them and went up hills, or worked with good antennas from their homes. VHF, or at least 2m, was transformed into a band where you could get good long distance DX contacts almost all the time.

It isn't like that now. There are no "Class B" licences in the UK any more, as they were all converted into Class A. There seems to be a lot less enthusiasm for 2m portable work, and we now have 4m and 6m to compete for our attention. There are no 2m only SSB rigs either.

We now have an exam syllabus that barely mentions VHF, and quite a few pass their exams unaware than VHF is very well suited to DX working. VHF does not mean "FM". OK, there is a lot of FM on VHF, but there is also lots of CW, SSB, data modes and so forth. And VHF is no longer just 2m in Europe, but is now 4m and 6m too.

So this posting is realistic enough to accept that you are not likely to find the same heights of activity as people fondly remember from the last three decades of the last century. But what you will find is a lot more, better equipped, well located stations, usually working from home, and a lot of keen contest operators. And of course some of the most astounding propagation you could imagine. The scene may have changed, but the bands are still as good as ever.

So let us assume that you have a rig which covers VHF. Plenty of folks do. They have a rigs which they use for HF, like the FT-897, the FT857, the IC-7000 or the TS-2000. These are fine equipment for VHF. Having said that, a lot of operators never use them on VHF, but stick to HF. And a few have rigs like the FT-817, often kept as an HF standby, which could well be used for VHF DX.

What would be needed to get this equipment going on VHF so that some DX could be worked? Not much actually. If you want to try 6m (50MHz), you may already have an HF antenna which would do some service. I have a G4MH mini-beam. OK, it does not work very well on 6m, but well enough to bring me summer Sporadic E (don't worry about the propagation modes, more of that in a later posting). Summer is a great time for VHF DX, but there is always something happening.

If you already have a "white stick" vertically polarised VHF antenna and use FM, you are only seeing a very small part of what 2m can do. VHF DX is mostly sent with horizontal polarisation, and if you are working on the wrong polarisation your losses are huge. Yes, you can listen about on your FT-817 or whatever using a vertical, but you will not get much in the way of results.

So the solutions I am going to suggest are for simple horizontally polarised antennas which will certainly get you going.

Antenna 1 - the 2m band Diamond A144S10R (not to be confused with their 10 ele 70cms antenna!).
This is a compact (2.13m boom) yagi-type beam which offers 11.6 dBi gain (which is about 9dB gain over a dipole). It is light (just over 1Kg) and small enough to look pretty inconspicuous. It looks a bit like a TV antenna and the neighbours will hardly notice. Of course with a directional antenna you will need some sort of a rotator, but this one can be turned by a light duty "TV" rotator. Or you can slip it onto the pole above your HF antenna if that already has a rotator. The only reall snag with this antenna is that the maximum mast diameter is 47mm which is too small for most "2 inch" poles. I just drilled another hole in the boom and fitted a larger mount, or you can use any general "boom to mast" clamp, but be careful not to over-tighten it and squash the boom flat. Presently available, on eBay, this Diamond antenna can be bought for £90.

Antenna 2 - the 6m band Diamond A502HB
Another compact from Diamond, this one offers about 6.3dBi gain (or about 4dB over a dipole). It is small and light with a very short boom (0.75m). This antenna is often described as a yagi, but actually it is more like an HB9CV antenna. It has two driven elements with a phase matching connection running along the boom. Of course it is a lot wider (3m) than the 2m antenna listed above, but it still looks very inconspicuous. It could easily sit above an HF beam and be hardly noticeable. And despite the weather here, I have mounted it above a "TV" rotator. This is an effective 6m antenna and capable of working modes like aurora and meteor scatter. For sale as I write, on eBay, for £93. 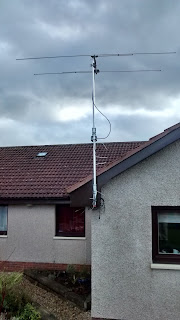 The photo above shows a Diamond A502HB on a Conrad TV rotator. The common Hy-Gain TV rotator is similar.

So these two Diamond antennas are recommended by me after having used them for several years. They are NOT the best DX antenna, but they are the sort of thing you can put up to try out VHF and see how you get on. Both would fit above an HF beam, and either could go above a lightweight rotator.

I might add that Comet make an antenna very like the 6m Diamond one, but over the years I have found Diamond construction to be better than Comet (just my personal view). And then others make HB9CVs too, but I have not tried them out.

So we have two antennas which remove the idea that VHF antennas have to be expensive, bulky and difficult to get. Then there is the co-ax. By all means try cheap co-ax, but RG-213 is really the place to start for higher VHF. RG-213 is thicker and more difficult to work with than normal HF co-ax, but it offers many advantages. 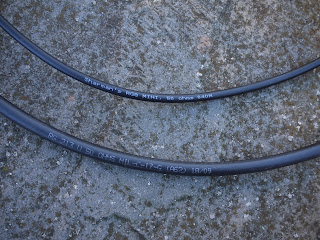 On top is RG8 (mini) which I often use for HF. Below is RG-213, which I use for VHF. Obviously the 213 is thicker, but the key advantage is that the losses caused by attenuation at VHF are much lower with 213. At 100MHz, on a run of 100m of co-ax, 213 will have about 10dB less attenuation than normal HF co-ax. Even at my lengths (30 metres or so) at 2m the result of using 213 is to just about double the power reaching the antenna, and also to double the signal on reception. Worth having.

Actually, for 2m I use Ecoflex 10 co-ax for even better results than 213. At 50MHz, where standard HF co-ax could be used, I also use 213, which some would view as a bit over the top. OK, but I am a bit of a VHF enthusiast. For general use, RG-213 would be the standard for 2metres around here, though most people use standard HF co-ax for 6m.

What could you hear with these antennas and this co-ax? Answer: a lot further than you can with FM and a vertical white stick. 150km on 2m should be possible under flat conditions. If there was any tropospheric propagation then up to 1000km should be possible. With sporadic E I have worked as far as Belarus on 2m - though that is reasonably rare on 2m. I have often worked 1500 km on 2m meteor scatter using the Diamond. For 6m, I have worked all over Europe on meteor scatter, and likewise all over Europe on summer Sporadic E. Best dx from here on 6m so far is Puerto Rico. Remember this was worked on a simple Diamond 2 element and 100 watts.

Maybe now I have moved up a step with better 2m antennas and better co-ax. But I still did amazingly well with just the Diamond and RG-213. And for a rig I also have the FT-817, plus a little RM linear which boosts my power by a useful amount. On 6m  I still use the Diamond. Yes, I have made life a lot more complex but it does not need to be. Certainly for starting off, these simple antennas are very effective.

There you are really. Why not try VHF DX? With a rig you probably already have, some co-ax, and a fairly lightweight antenna, you can make a start.

Email ThisBlogThis!Share to TwitterShare to FacebookShare to Pinterest
Labels: VHF