You win some and you lose some.

It has been a brighter day on the meteor scatter front.

This week is the peak of the Eta Aquarids meteor shower. I did well in this shower last year, mostly on 6m. This year my 6m activity is hampered by the linear problem so it was always going to be mostly 4m this time

SP2MKO would be in a new square, so I would like to meet him again some day.

On 70.173 I was called by G4FJK. I would like to get a contact with Tim on this method of propagation. Even though I was getting him well, he could hardly hear me. We had decided in advance that I would beam at 90 to 120 degrees, and try to use backscatter. Unfortunately it did not work this time.

During all this fiddling about, DK5EW popped up on 70.173 at 11:00 and called CQ. He must have heard us and would work either one of us. His signals were very clear with regular bursts. 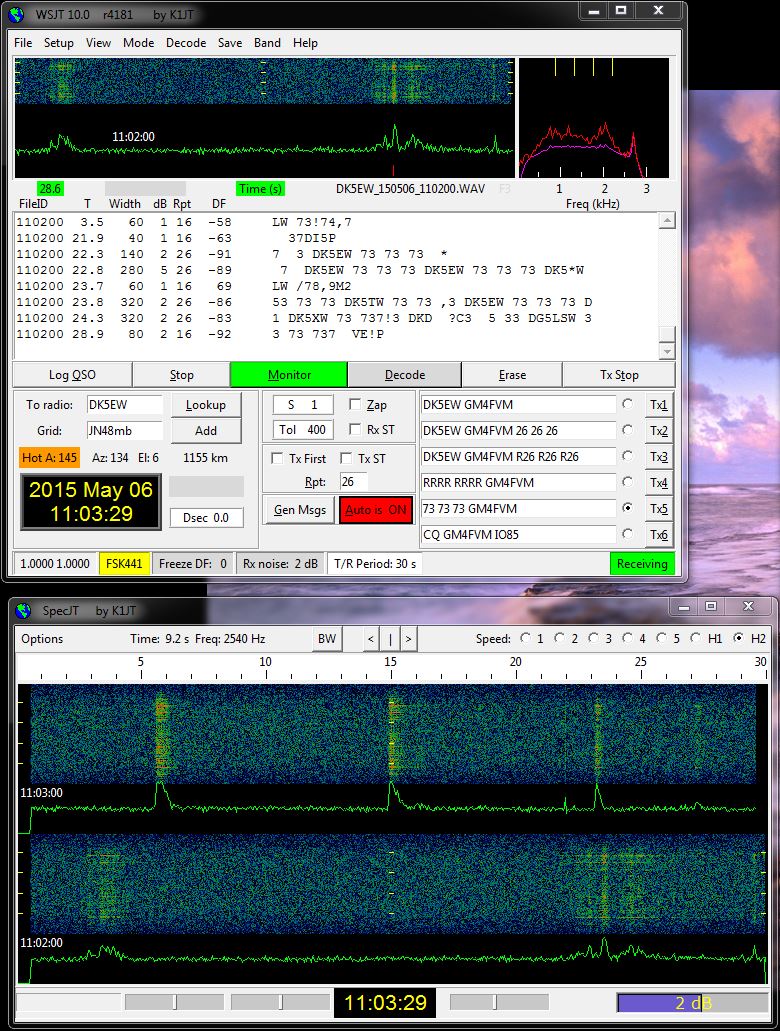 DK5EW is in JN48 square at a distance of 1155 km. That was new square for me on 4m, down in South West corner of the country. Although I have worked several stations in Germany on 4m over the years, I do not have many squares.

Returning to 70.173 for a further blast, I heard DM2HBG calling CQ. There then followed a quick exchange. You can see one of the strong echos from the meteor. 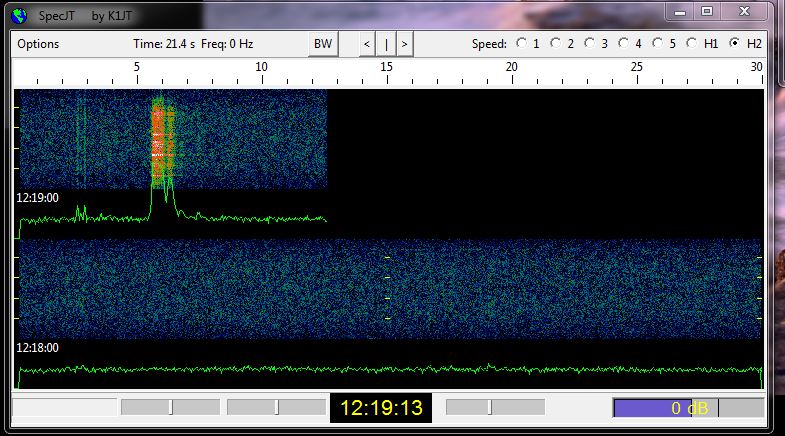 DM2BHG is over in JO51, another new 4m square for me. This one is in the old East Germany, an area of the Harz which I have visited. Beautiful part of the world. Only 967km, and really strong signals. Done in a trice.

So there were four QSOs well spaced out in Europe, and all good, easy to work, stuff. 4m meteor scatter certainly seems easier to work than 2m but there are very few stations. Whilst 6m MS is probably easiest to master, I feel that I do not have the power or the antenna to do well at it. I did try a few CQs on 6m, but got no replies to my 30 watts.

All five stations, plus GU8FBO, then went on to work various permutations of a QSO party. It shows that the meteor peak is not necessarily at 07:00, and there was still activity after 13:00.

Two new squares. So that is what I won. What did I lose? Well, maybe both a square and a country.

I mentioned before that I worked Janne on 4 metres as LY/OH5LID on 30 April. Not only was Lithuania a new country for me, but also KO15 was a new square. Shortly afterwards, someone posted on the cluster that the Lithuanian licence only allows CW and SSB, not data modes. Janne did not work anyone after that and he turned up the next day in Estonia - I could not hear him from Estonia. I have no idea whether this is true - certainly the bandwidths permitted in Lithuania are specifically for CW and SSB.

When is a data mode SSB? Well, they way many of them are generated is by passing audio tones into an SSB transceiver. So you could argue that FSK, for instance, is SSB. I am not aware that SSB modulated by computer tones is in any way less "true" SSB than SSB modulated by human voice tones.

However, it may be that the Lithuanian authorities do not want data modes used. I have no idea if the licence conditions state this specifically. Data modes certainly sound different from SSB, and the repetitive tx cycles might cause a problem. There is no reason why data operators would not listen between overs in the same way as voice ones, but it just seems to look that way. With Lithuania bordering countries which use 70MHz for broadcasting (Russian Kaliningradsk and Belarus), then maybe they need to keep things low key.

Until this becomes clear I think that I may have worked a new country and square using a mode which is not licenced in that territory. Which surely makes the contact invalid. But how many other contacts in my book were also illegal under their own rules. I feel that at least one other one is doubtful, but how am I expected to know the rules in other states? I do not know the Lithuanian ones.

For now I am still counting my contact with Janne in my list. It is a personal list and I have not applied for any awards.  I feel sure that I will work Lithuania again some day. I have seen another Lithuanian station listed on the cluster (using data modes!!!). So it will work out in the long run. But it is an interesting issue.

Oh yes. Did I mention that I have not worked any Sporadic E this season yet?