I have been busy with various things but I found time this morning to turn on the rigs and capture an interesting spell on 10m.

I had to turn off as I needed to go out. 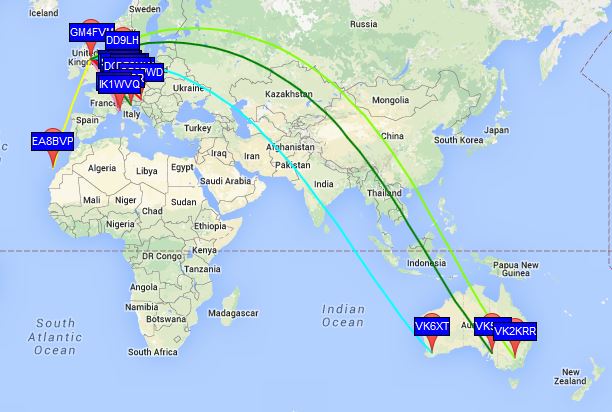 That was a sign of health on the 10m band. However, the solar Flux index has fallen to 104. SFI is a measurable figure based to solar noise, which in turn is a good measure of sunspot activity (and therefore sun activity in general). Somewhere about 100 on the SFI is my break-even point. Below 100 SFI and 10m starts to be closed for most of the day. Of course, Summer Sporadic Es continues, but F-layer dx tends to be absent. I am please of course to get 2way to VK, but hope of ploughing on and getting lots of 10m dx seem to be fading.

Not that we can write off the Sun. We just don't know what is happening, and we never really did. After a few increasing 11-year solar cycles, people were predicting a great cycle this time. Looking back now, the evidence was there to suggest that we are in a downward trend. This has been a disappointing cycle. almost no 6m F-layer openings. Traditional cycle-toppings paths into the Pacific on 10m just never appeared this time.

I am 60 years old this year. The good side is that I will get my free bus pass (or I will unless somebody abolishes it). The not-so-good side is that I may not have too many 11-year cycles left in me. And they come in pairs (actually 22-year cycles with half positive polarity and the other half negative). Most predictions suggest that the next 11-year peak will be the pair of this one - i.e. just as bad and the next one could worse.

I am not complaining and I am preparing for what is to come. I might even take up 40 metres!

For now I have learned something interesting (for me anyway) in this solar cycle. I have never seen one so poor (quiet) of course. But I thought that lower solar activity might mean fewer less powerful sun spots. But actually the sunspots have been just as powerful, there have just been fewer of them. So the effect of the St Patrick's Day aurora was a good as any other, but we just have not had so many events.

The interesting aspect of this is that we could yet have some very powerful solar mass ejections. As there are fewer spots, the chance of any one of them being directed right at us is lower. But if it is directed at us, it could be blistering. OK, probability says this is less likely than during a really powerful solar cycle. But you cannot rule it out.

You might say, the chances of tossing a coin and getting a head is always the same. And if you toss the coin less often, there will be fewer heads and fewer tails. But still the probablility of any coin coming up heads never changes. The chance of any one these solar events being a satellite-melting, aurora smashing, black-out creating, computer blasting, power system destroying, monster is not smaller. It WILL happen someday. It could be tomorrow.

But it probably will not be tomorrow.

I am still uncertain about the Flex and data modes. I did work OK2BRD on 28 April, but I am not convinced. So when I saw that LY/OH5LID was operating from Lithuania on 4 metres I decided to listen on the Flex. Nothing. I felt more confident on the IC-7100. Connected that and right away I heard Janne and the WSJT software decoded him calling CQ from KO15 square.

Within a minute of me sending a report to him he came back with my report and correct callsign. I went straight back with RRRR and then after a few minutes the software crashed. It looked to me on restart that I had got an RRR from him. I did not need it anyway. The QSO was complete from my end once he returned of my callsign and report (which I got twice). I am not sure if he got my RRRs due to the crash. So that is a new country (Lithuania) on 4 metres (just another one to reach my target for this year). And a new square too  - number 138 on that band. 4 more squares for this year's target. I suspect that Janne will appear from some other squares, which might mean I could wrap most of it up by his dxpedition alone.

Some funny propagation. I heard S57AC and I2PJA (yesterday) on 6m and while they were strong, they could not hear me. And I heard the F6IKT beacon on 50.079. Still have not WORKED anyone on Es this season. And I was calling CQ towards Germany on meteor scatter this morning when someone came back to me on SSB. Nothing wrong with that, except it took me about 5 minutes to press all the buttons and get back to him. By that time he had found a local to work and then he faded out. My fault. I thought it was DL9YEB but it looks like it was DL9YE. Still, he was 5/9+++ and to add to my woes, as he faded, there were lots of meteor pings on his signal. I am just missing Es QSOs this season. So far ...