Some more tropo and having delusions of competence.

Sometimes I get carried away. I allow myself to be deluded into thinking that I know what I am talking about.

Maybe I am not the only ham who suffers from this.

Anyway, sometimes I believe I can actually out-think the experts. In this case the expert is the very reliable William R Hepburn, whose superb tropo ducting predictions are linked to the sidebar list on this blog.

I related this unwise prediction of mine to Jeremy M0XVF as follows:-

It is blowing a hoolie here now so I cannot imagine tomorrow will be very good. Maybe further south. I live in hope though.

I do not need to know anything else about tropo, just that Hepburn knows best. I can look it up, and not go off on fantasies of my own. In this case my predictions were wrong, and his were right. Who'd 'ave thought it?

Jeremy sent me a reply that the Angus beacon was loud with him, the GB3NGI beacons in Northern Ireland "v loud indeed" and that he held hopes for conditions into Europe. He was right. There is nothing like the facts to upset my imagination.

If I do get on my high horse and think I know more than I do, I hope I can accept it when somebody else knows better. I decided to accept that Jeremy knows what he is on about and have a listen.

I left Mrs FVM to watch some gruesome TV programme about people who suffer from unidentified dread diseases, and turned on the radio instead. Tough choice, but someone has to swerve the morbid images of pus and sores to check out the radio. Did any of them have bunions? I will never know. 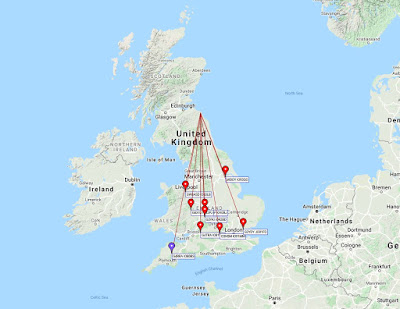 Click the images to enlarge (seems to be working again).

NOTE TO SELF:- must do something about that 70cm power level, apart from just complaining about it.

OK, so I was wrong. What was Hepburn saying now? 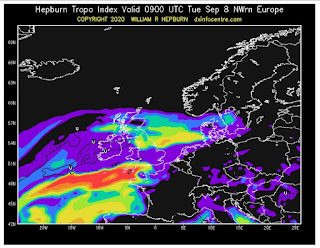 Above:- Hepburn tropo prediction for 8 September 2020.

I was beginning to think that I needed to take this a bit more seriously. The weather forecast on the TV was still showing nothing really interesting, with moderate pressure and a meandering front passing from west to east. But Hepburn also considers other factors such as the relative humidity of the air which is a crucial factor. So I guess he knows better than me.

Of course he knows better than me. He has been doing this for decades.

I needed to get up the next morning and spend some time trying to work someone. Oh dear. I am not at my best in the morning.

Next morning produced this:- 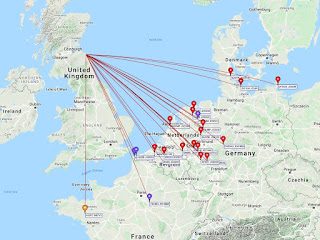 I am not sure if I like using different coloured pins on the map to show up different bands. Apart from anything else, there is no coloured pin for 70MHz. There were two contacts on 4m during the tropo opening, one with ON4IQ and the other with DL6BF. Tropo contacts of 702 and 730km are good stuff on any band, and maybe my best tropo contacts on 4m (I did work ON on 4m tropo many years ago but that was on CW and my CW is never nice for the other station).

So on 7 and 8 September 2020 I worked 33 stations in 23 squares and 7 DXCC. I concede that Mr Hepburn was correct in his predictions.

I might mention that the RSGB UKAC 70cm contest was held later on 8 September but I seemed to have done better by not waiting for the contest. I was finished at lunchtime, and the TV viewing that evening was much better than the day before (Tour de France, England getting beaten at cricket and Eat Well for Less!). I would rather watch Gregg Wallace make an omelette than listen to a flat band at contest time.

Before I leave the subject of 70cms and tropo, I want to mention that tropo also happens when there is no ducting. Combining both days when there was ducting with the other eight from the last ten days produces this:- 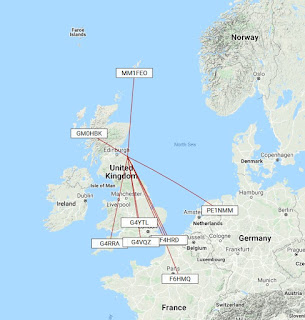 Is this event over? Probably but there are usually more high pressure systems on the weather chart somewhere, even if they are still days away from reaching me. I need to watch Hepburn more carefully.

What is left of this event seems to be producing very good conditions further south and east of me. Here normality has returned for now.

This opening gave me a good chance to give a work out to my disgraced Gemini 2m linear amplifier. I have given it some surgery to get it working again. It has been out of operation for four months and it needs a good soak test before I am willing to claim it is now ready to go solo. I did use it for all the 2m contacts listed here and so far so good. I will write it up if and when I am happy it is working again. After six breakdowns I can hardly be blamed for not trusting it. Now that it is out of guarantee I feel able to do some work on it myself - at last.

I have also been poking at my TE Systems 175W 432MHz linear which seems to be terminally silent key. It needs money spent on it and I doubt if it is worth it. With such wonderful high power devices now available I an unsure whether I should be spending my cash on old-style replacement Motorola transistors. If I do get it working, it will still be an old-school linear as opposed to the latest high gain amplifiers like those from Freescale. And then there is the little matter of changing 5 transistors with surface mount components on their fingers. With my shaky old hands? New the devices, even un-matched ones, would cost more than the linear cost me in the first place, and that leaves second hand ones. Hmmm.

I hate abandoning something that needs to be fixed. Maybe it should be a project on the shelf for days when there is no tropo,

Never mind, if I can do all that on 70cms with 65 Watts I cannot be too unhappy.