Good openings on Es and tropo

The peak Es season has been accompanied by nice weather at GM4FVM-on-sea. The weather is significant as it has been caused by a high pressure system over the North Sea, producing tropo conditions between here and what the British call "The Continent" (meaning mainland Europe).

As I reported on 6m recently, just a little about that band. There have some more blisteringly good Es openings. I have made a list of countries I have not worked this year. These DXCC should not be difficult to reach and I have concentrated on them first. They are all in the Balkans or Eastern Mediterranean - I am targeting my distant cousins as I have "The Levant" in my heritage. The far end of the Med might be in my blood and my DNA, but I have been ignoring it as an area to work this year.

Making a list transformed my coverage. Simple targeting netted Libya, Cyprus, Turkey, and several Balkan states such as Montenegro and Macedonia. It turned out that although I had worked Turkey before, all the rest were all-time new countries too. It is funny how the mind plays tricks on you as to where you have worked and where you haven't.

Anyway, all this has got my 2018 6m DXCC list up to 57. There are still 6 states on my little list as obvious targets, never mind the less likely ones. I might yet get into the 60s, but I doubt if I will challenge The Great and The Good in the 80s and higher.

Without some target to shoot at I was languishing in the doldrums.

4m has been a spectacularly great band, something it does often but not regularly.
Nearly all of these contacts have been on FT8 mode.

Not bad for a band many amateurs choose to ignore because of its reputation for there not being much activity.

When it comes to 2m, the tropo openings at the beginning and end of June have been main drivers. While 6m waxed and waned, being silent for two days, 2m served up the usual tropo opening diet of North Sea Coast contacts.
I had already mentioned the early June activity and the Es into Croatia and Bosnia before in this blog. The late June tropo added to the picture.

And now for something completely different.

Although I think of myself as a VHF operator, I do run 10m as an indicator of VHF conditions. I am genuinely interested in 28MHz activity in its own right, but also for the light it sheds on VHF. It is the next neighbour down the hill. I don't pay much heed to the neighbour up the hill, 432MHz - the "70cms band". Maybe I should. ("The hill" I have in mind here looks like the same hill as the one in the 1973 Ridley Scott "Boy on Bike" Hovis bread commercial).

A certain amateur from "the Continent" has been goading me to get going on 70cms. Another has been telling me about the joys of using UHF in general. All this began to wear down my resistance.

In one of my rambling outpourings about my imagined antenna dilemmas, I said to David, GM4JJJ that I had not decided whether to add an extra element onto my 2m yagi for EME, or put up a 70cms antenna instead. In passing David mentioned that in the past he had used his 2m antenna on 70cms. So, I thought, why not try the same thing during the current good conditions ... ??? 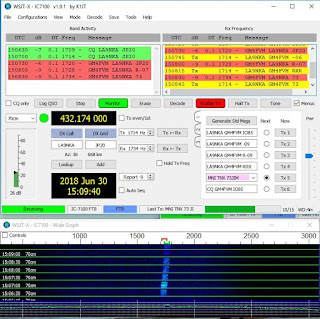 To say that I was surprised to work LA9NKA on 70cms would be an understatement. I had just turned over to 70cms and set the WSJT-X to 432.174 to see what I might hear while I was out for a walk. When I immediately had to reply to a CQ I had to be a bit careful not to blow up the 2m ancillaries. I turned off the 2m linear amplifier as otherwise it would not have liked the 70cms signal. I also turned off the 2m masthead pre-amp. Turning them off allows a (low powered) signal to pass through. It works in the short term but over time I would inevitably forget to turn them off someday.

I was using a 7 element 2m beam of the DK7ZB design. It has a balun which I suspect will not help much on 70cms. It turned out that LA9NKA was using a 5/8th vertical. Using such "non-DX" antennas just shows how good conditions much have been on 70cms.

I only tried this because I could. If I had the normal 2m transverter set-up I would have had to change over lots of plugs to do it, but as I had the IC-7100 connected up for 2m it was fairly easy to change over. Just why the IC-7100 was in use was the result of a complex tale of incompetence by me, but never mind that now.

To work one new DXCC at UHF was interesting, to work two was startling ... 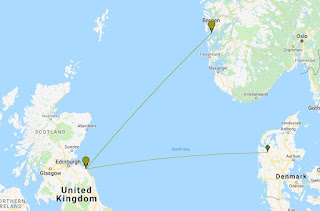 To be fair, I think that OZ1JMN was using a proper antenna. But still not a bad QSO.

I am now thinking more about the possibility of a 70cms antenna.

This needs to be taken with a bit of caution. I am not deluding myself that there is a lot of activity to be heard on 70cms from IO85 square. They used to say the same thing about 70MHz but it never put me off that.

There might only a few days when anybody at all can be heard on 70cms from here. The same is true of 2m Es, but it is brilliant when it happens.

I have always known how good 432MHz can be during tropo openings, and occasionally at other times. Now I have proof.

Of course I shall always be only a VHF enthusiast. Except when I am doing something else.