Es and broadcast QRM, the Wouxun 950PL, and 2 computers with PstRotator

Sometimes with amateur radio you just have to wait and watch...
At other times you let your guard down. You go off duty, you get slack, you relax. You know, you have waited for ages and nothing showed up, so you took it that nothing was going to happen.
It was when we were slacking, two days ago, that we missed Moldova on 2 metres. That would have been a new country and a new square. I saw something happening on EsSense, but I went out and cranked the antenna up and poured myself a Ribena, then I came into the shack and heard somebody else working Moldova and then the opening was over. Grrrr.

You win some, and you lose some.

Often, when Es is at its strongest, there is simply nothing to work. On 6m here the band is full of Russian (and general Eastern from here) TV signals. On 4m there are lots of OIRT broadcast signals. The noise gets so high that the rig overloads. Curtains. I might as well climb into Katy's bed (no tail to show, honestly; I am not The Devil).

Here is such a day (18 June). Although a bit short of overload, the radio was full of OIRT on 4m and no further progress could be made. I have got used to sitting this type of thing out. I might be able to hear an SSB signal in there, but there is no chance of being able to understand it. Not with my ears anyway. 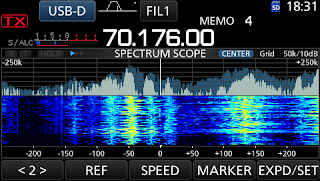 You might be able to see, just between two peaks of FM broadcast, a faint line which is indeed an amateur signal. Right in the passband of the receiver on 70.176 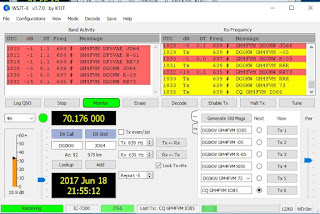 That line is indeed DG0KW. I had just worked DF5VAE (accidentally I was on 70.170, but he still found me). Apparently JO64 is new square for me though I was surprised by that.

It certainly looks as if you can squeeze a JT65 signal between the sidebands of the FM broadcast signals. In fact, DF5VAE was more of less on top of an FM signal, yet he was easy to decode.

I am beginning to get the impression that JT65 works quite well in the face of heavy FM interference. I suppose CW might work too, but JT65 takes the agony out of listening to the terrible raspy noises. I could never have worked either of them on SSB, and indeed I would not even have tried.

Just a word of explanation about OIRT for those of you outside Europe. The Organisation Internationale de Radiodiffusion et de Télévision is (or was) a group set up after World War 2 to establish TV and FM broadcast radio standards in Europe. The FM radio band they proposed was around 70MHz (now 65.8 to 74MHz). Western European nations left OIRT in the 1950s once 88 to 108MHz became their preferred band and OIRT was left to cover Eastern Europe, or in reality the former USSR and its affiliates.

In the past radio amateurs had to deal with broadcast stations in the 70MHz band from many countries in Central Europe. Gradually former "Warsaw Pact" countries abandoned OIRT frequencies and opted to go with 88 to 108MHz.

As far as I know OIRT as an organisation no longer exists, but the term "OIRT" is used to describe stations still operating on those frequencies. Typically, I hear stations in Russia (especially Kaliningrad), Ukraine, and Belarus, but other countries further East still seem to be operating too.

I believe that most OIRT stations are now just duplicates of stations in the 88 to 108 MHz band. It must cost a lot to keep them running as they certainly must rack up quite an electricity bill.

Wide band FM at considerable power is just one of the snags to get over when trying to work Es on 4m. It just shows how good the propagation is on that band. They do not make it impossible to operate, you just have to find ways to work round the commerical stations, as we used to do on 160 and 80 metres in the good old days.

I had intended it to be a mobile radio and I still think it would be great for that. However, it never made it past the shack where it replaced two separate rigs.

There is a good review of it here ... if the link is broken it is this ...
http://www.g3zpf.raota.org/articles/wouxunKG-UV950pl.pdf.

In my experience so far this review says almost all you need.

The 950 is really is two radios in one box, and one of them only covers part of the range. This is odd and hard to get your head around. I have one set up to cover 50 and 70 MHz, and the other for 144 and 432 MHz. Strange. Luckily mine came with the programming cable thrown in so I can tame it that way. I would hate trying to set it up manually as it took about 10 days to figure out how it works. At least with all the memory frequencies in place I could adapt to it and learn as I went along.

I had looked at the 950 as a possibility before, but it seemed too expensive. Adding the programming cable tipped the balance.
What can I add to the G3ZPF review? I have it mounted with the control unit in the shack shelving and the radio itself mounted at the other end of the shack - the control cable comes as standard. I took the strain off the mic cable by adding a right angle ethernet plug with a cable to an ethernet "back to back" socket. The mic plug is therefore not tugging on the rig socket when you transmit.

There may be two radios in the 950, but there is only one RF socket. I already had a Comet CF-530 duplexer doing the same job for my Wouxun handheld in the car, so I brought it in to allow me to split the 50 and 70MHz signals from the 144 and 432 MHz ones.

The review mentions the volume control issue at low volumes. This is a snag for me - I cannot get it low enough with the inboard speakers. Easy enough with outboard speakers. So I just set the speaker on the microphone as my main speaker. In a car this would not be an issue as low volumes are not needed.

It takes a bit of getting used to. I suppose that every new FM radio does. Now that I know that it takes two presses of the PTT coming off scan to work the transmit function, I can do that. I can now enter frequencies via the keypad, but the process takes some remembering. However, I use it almost entirely on memory mode.

Aside from the rather odd control arrangement, the radio side is fine. It is powerful (40 to 50W) and sensitive. The squelch works well. Sensitivity is similar to other single and dual bands rigs I have used, and there appears to be no performance penalty by reducing the rig count by one. It is certainly streets better than the ancient ex-commercial PMR radios still in use of 4m.

As well as looking as if the case is used as a heatsink (as on my previous VHF FM radios) the 950 is equipped with a cooling fan. This is great. I used to have radios like the Yaesu FT-1900 and 2900 which got incredibly hot. A cooling fan is very useful, and I cannot hear it.

Despite all the comments to the contrary, I cannot get two instances of WSJT-X to run reliably. Two versions of MSK144 overload the computer (any computer I use up to my most powerful), and two versions of JT65 run for a while and then one of them get stuck in decode (but stops decoding). So I split them across to computer to see how I would get on.

So far so good. There is no detectable increase in noise, though I have not looked everywhere yet. I may add yet another display screen. I can now run two versions of WSJT-X easily, one on each computer.

I have used a "Smart KM-Link" to allow me to control both computers from one keyboard and mouse. This is a USB device, unlike the older switches which also  switched the monitor. It allows the mouse to move between the screens and automatically switch between them. Apart from some fan noise from the extra PC, the operation of the screens is exactly as before.

This works fine but I struck a problem with the rotator software driving my Yaesu G-600 rotator (the G-450 uses the standard Yaesu mechanical display). The display for my existing software prevents the mouse switching between screens. As I was using the basic software which came with the EA4TX ARS-USB rotator controller ("ARSVCOM"), it was time to switch to some more advanced software.

For some time I have been eyeing PstRotator by YO3DMU. I downloaded it and paid the very reasonable sum of €20 to register it.
It does lot more things than I will ever require. First plus is that I now have a choice of 12 presets instead of eight. Not that I can actually think of four more just now, but I have the option. I can enter a locator and the rotator will point there (useful) and even a callsign works too.

This is as far as I need to go with PstRotator for now. It provides lots of options for the future.

We will see whether I stick with two computers as time goes on. However, PstRotator seems worth having.