The Mother of All Meteor Scatter Contacts (MAMSC)

For someone who could have won the All Ireland Waffling Contest in his youth, and who went on to get better at rambling sentences with age, I write very terse notes in my diary. You all know how easy it is for me to fill a blank page (several pages really) on this blog, but the diary entry last weekend simply said :-

And so they did. Hooray!
PSK reporter as shown above does not report all the contacts available as many stations do not turn it on.

The Lyrids meteor shower is one of the top five of the year and often produces excellent results. Hence the diary entry.

Even old GM4FVM got in on the act. It helped that I could not sleep very well and had some early starts. QSOs at 05:39 are not common hereabouts. Over the four days since activity suddenly picked up I worked:-

All of these, except ON5PU, were stations I had worked before, but at least it was activity. And OK1DIG was a new square for 4m, as previously I had only worked Dan on 2m.

MAMSC, (the mother of all MS contacts) (why do we have these silly "mother of" things?), was working SM0EJY.

So here is the anatomy of a 2 metre meteor scatter contact.

Mrs FVM wanted to watch something on the television, called Broadband or something. Some sort of detective drama which is too dark for me to want to follow. It isn't the delightful "Brokenwood Mysteries" or similar comforting quirky series with flawed detectives and jolly macabre pathologists who are full of delight at doing another gruesome post-mortem. No, time for a bit of amateur radio for me.

With at least an hour to occupy I decided to call CQ for ten minutes each on 6m, 4m and 2m. It took a while to start, so CQ on 2m was from 20:42 to 20:52, beaming East. I had expected to be on for longer, but Mrs FVM emerged at 20:59 and said that she was tired and it was bedtime for her (almost 10pm local time). Not having seen any response to my CQs I decided to go outside and wind down the antenna and turn in.

On returning to the shack I found this on the screen:-

Hmmm. This looks like SM?PJY, but there is no sign of that callsign in QRZ.com, so maybe something else. Nothing else for it but to go back out and put the antenna back up.

I turned the beam towards SM and started calling QRZ? GM4FVM. or QRZ? SM? GM4FVM.

The question mark was probably an invalid character. So who is this? Where to point the antenna?

Going through the listings, there was no SM callsign ending in PJY. There is, however, an SP3PJY, a Polish club station. I tried turning the beam a bit more South of East and tried calling QRZ there.

I decided to call beaming East until a hour after the initial CQ, which would be 21:52. Two metre meteor scatter can be like this. It can take a hour to get one piece of information. During the peak meteor shower, in the morning, you can complete a QSO in minutes. In the evening it can take ages. As the beams are far more directional on 2m, it is hard to know which way to beam.

In this case, almost an hour in, I had no idea of the callsign of the station calling. Nor did I know which country it was in. Plus it was getting late, and it was even later in clock time in either Sweden or Poland, or anywhere to the East.

This is getting like my two longest QSOs which each lasted about 3 hours. Both were in the evening, but in those cases I had been alerted by email so I knew that the station was standing by. This one might have gone to bed by now.

But still, the neurosis of the amateur digs in. This is the only time I feel any connection with Tony Hancock's spineless "Radio Ham". Waiting an hour to get the other guy's callsign creates amazing thoughts in the mind. Could this be a real DX station? Is this the QSO to set a record? It must be, if it takes an hour.

So at 21:52 I went out to lower the antenna and give up. On returning to the shack I found this:-

I had been wasting my time looking for SM0EJY in QRZ.com, as Andy isn't even listed in it. However, I had worked him before, so the logbook provided all the details I needed.

Nothing else for it but to go back out for the fourth time and wind the antenna back up again. At least now I know who it is. I can point the beam the right way. But is he still there? Has he now gone to bed? After all, he has been sending the same message for over an hour himself. Is anyone else determined enough to spend so much time to complete a repeat QSO?

If it takes a hour to get the callsign, how long will it take to get the report? 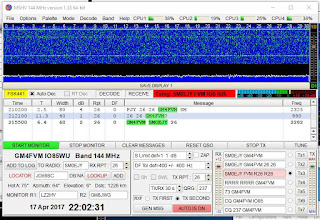 The reply came after just 24 minutes!

Now you might think that this is not enough. It is only a partial callsign. The question is, how many SM0E.. stations might there be on 2m meteor scatter to confuse it with? I doubt if SM0EUI has decided to pop up here. If it was a contest I might take a different view, but in these circumstances this is good enough for me. Me, in a contest? Time to send 73.

And then of course we get into the 73 dilemma. I need to receive a 73 because it lets me know to stop sending my 73. It provides "closure". He needs to receive my CQ for the same reason, but he is under no obligation to send one. It is not an essential part of the QSO. It would be nice if he did because it would end it for me and it might provide some more characters to confirm the last reception.

For once I need not have worried too much as the reply came at 22:30

There is a sequence there M0EJY 73 S which is a slice from the repeated SM0EJY 73 which was what I was after. Time to turn off and wind the antenna down, again.

So what is to be learned here? Well, outside the peak morning session, MS QSOs can take a while. This one was not quite up there with Father of All Meteor Scatter Contacts (FAMSC) or even Uncle Terry of All Meteor Scatter Contacts (UTAMSC), which were three hours each. But they were skeds, pre-arranged, and I knew at the start who they were with. This was a random contact coming from a CQ. That is the way I like it (no KST chat room here). At 20:52 to 22:30 it was only 98 minutes (or 108 minutes maximum, as I am not sure when Andy heard my first CQ). A mere split second in the great scheme of things. I mean, which HF DX champion would spend less that an hour and a half on one single QSO?

Sometimes I sit and listen to HF contests. I hear stations using CW so fast that it puts me off even trying to listen beyond the callsigns, never mind actually coming on and giving them a point. How many QSOs do they get into 98 minutes? On the other hand, I judge a QSO by how difficult it was to complete, rather than how fast I can cram it in to my busy schedule. You may come to your own conclusion. And of course there is room for both.

It is a contact like this which gives rise to habits. If I cannot get a reply now, I know that the thing to do is to go outside and wind down the antenna. Maybe not.

Could it be that lowering the antenna might have raised the take-off angle and made the contact possible? I doubt it, but you never know. The software suggests a 6 degree take-off angle as the optimum for this contact.

I have been ranting on for ages about how easy it is now for anyone to have a go at meteor scatter. This is still true. On 6m you can find your feet. On 4m it gets a bit racy. On 2m you have to become a deer stalker, using your patience to catch the prize. Even if the prize is working someone you worked before.

By the way, if I had not installed the quiet lights, I would almost certainly have missed this QSO. I put them on when I go out to wind down the antenna, and the old ones would have created quite a bit of noise while I was doing it. And the key decodes in this contact happened while I was out there.


If only people on 2m used MSK144 instead of FSK441 life would be easier. I bet the contact with SM0EJY could have been done in half the time or less on the better mode. And if we had been using WSJT-X, we could both have gone to bed after the exchange of callsigns and left the software to finish it (only joking, I would not do such a thing - and anyway, who would be there to wind the antenna up and down every quarter of an hour or so?).

But hey, I have had my fun, and that's all that matters (as Father Fintan Stack famously put it in the wonderful "Father Ted" TV series). 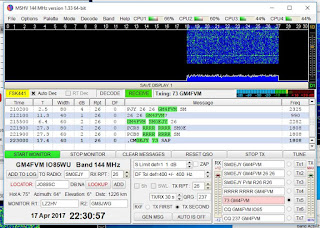 I suggest that to maximise results and to prevent very long QSOs, call CQ in the morning. So my message is "do as I say, not as I did".