The February 2017 edition of Practical Wireless magazine has a review of the Yaesu FT-891 HF rig. Nothing wrong with this rig, but it is not something I would be interested in.

As part of the review, G3WYW, who works for Yaesu UK, was asked why the rig covers only up to 50MHZ and does not include other VHF or UHF coverage. He is quoted as saying:

"Yaesu see the VHF/UHF market nowadays as being driven by their Fusion offering of a combined FM/digital voice capability."

In other words, future "offerings" for the VHF/UHF market will not be "driven" by SSB, CW or machine generated modes.

This may indeed be true. Marketing is a matter for Yaesu and they are quite entitled to come to that conclusion. No doubt their cash box is telling them to do this. However, I think it is sad and a reflection, not on Yaesu, but on the radio amateur fraternity.

If there is a demand for equipment, somebody will make it. Some people will make their own, and some of them will sell it too. I believe that Adam Smith (1723 - 1790, the Scottish originator of the social science we now call Economics) go it right when he said that the "hidden hand" of the market would provide what we need. He was talking about pins, but rigs and components work the same way. But it is also true that if there is little demand there will be little supply.

I believe that the reason why the radio trade is backing off making high quality SSB VHF radios is that the demand is tiny and getting smaller. You do not have to look far to see the results of that, and the cause of it. Lack of activity breeds lack of activity.

When the RSGB tried to encourage VHF activity in Scotland by tweaking the UK Activity Contests there was a howl of complaint from those living in the South. Yet if you listen to 2m SSB here you may not hear any station call CQ all day. In Scotland, at least outside the Central Belt, activity is tiny to non-existent, unless someone whistles someone else up on the dreaded KST jungle drums.

There is no widespread enthusiasm for VHF DX-ing any more. It has become a tiny niche in the market. In the 1970s through to the 1990s it was alive with activity. Not now. I am not going to carp about Class B licences, because I do not believe that had too much to do with it. There are far more possible explanations than just that one.

A recently qualified amateur told me that he was taught on his training course that VHF was only for "line of sight" communication. Indeed he believed that VHF meant FM, that only FM was used on VHF, and when I suggested otherwise he did not believe me.

The evidence is that VHF use for low signal strength contacts is declining. In this part of the world it is already virtually non-existent. The number of regularly heard data or voice stations operating on any of the VHF bands within 50km radius of me is one. It cannot get any lower or it will be zero.

It is not Yaesu's fault that they see no market for VHF or UHF outside the FM/digital voice world. That is their experience. I am sure that the other mass producers feel the same. If we neglect the older range of Yaesu gear, only the FT991 features VHF and UHF. Icom have the expensive IC-9100 and Kenwood the TS-2000 which is rather old itself. That is it. Each of these three have their "issues".

We have been sleepwalking onto this for years. Soon, the paucity of activists will bring about a paucity of equipment. That will mean that there will be even fewer active and then .... ?
===================
Following on from my previous post, I have now had the chance to crank up the MM0CUG mast. Not quite fully as I have not organised the cable correctly. Still it went up to about 9 metres which seems like plenty to me. 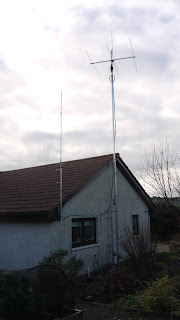 The antenna on the left is the 4 metre vertical. I am not exactly sure that it justifies its place as I only work one or two people on it on a regular basis. On the other hand 4m FM has brought me 11 DXCC over the years!

On the CUG mast is the 3 element 6m beam (which still has a 4m driven element) and a Diamond x30 vertical. It was a fairly calm day and even then I was somewhat concerned by the movement of the upper section of the mast. Unlike the Tennamast it does not inspire me to raise the mast in a strong wind. So far my 5 element 6m beam has remained in the garage. 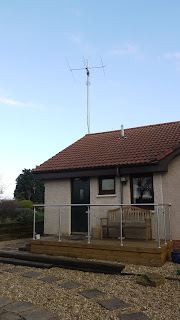 In all probability I will not raise it very often. The real purpose is to make the mast tiltable. My various 6m antennas were at its lowered height for years. However, why buy a mast which can be raised and not raise it?

So with this in mind, and with an eye on the wind chart, I cranked it up a couple of metres during the RSGB UKAC 6m contest. Before it was raised I worked one station, GM4JJJ, and after I raised it I worked ... nobody. I have to say that working nobody is quite common for me during 6m contests. I have given up coming on for them, but Mrs FVM was out and therefore I had the time to come on in between searching through my parts boxes (!). However, I heard several stations, including a few who otherwise I had never heard before. Even a couple of metres elevation helps a lot with tropo.
============================
I have mentioned a couple of times that my PCs are not fast enough to work MSK on WSJT-X 1.7.0. Further investigation reveals that they are not really fast enough to use MSK on MSHV either, so something has to be done.

As part of this I decided to try to restore a rather nice Asus motherboard with an Intel processor. Most of my computers are AMD powered, and this may be something to do with their dislike of MSK or heavy loads. Anyway, I do know that even rather simple Intel powered computers will power MSK quite happily.

This old motherboard was part of a computer which died thanks to having a power supply unit which blew up. This is in part why I dislike switch mode power supplies. It went down sending a large spike through everything, ruining most of the peripherals. The board limped on for a while before it stopped. As it seemed to survive the initial blast I hoped I might be able to breathe new life into it now.

As part of the exercise I decided to clean the heat sink and fan on the processor. I took it all apart and cleaned it up, cleaning off the heat transfer compound at the same time.

There is no room in the shack for this type of work so I do it in a small room called "the utility room". I have to bring parts and tools from the shack, but I am closer to the tea bags and the kettle. In the shack I have general parts boxes for little used things, and a set of labelled bags for more commonly used parts.

I know I have a tube of heat transfer compound. I even got it out when I worked on the 6m linear last year, but I did not use it then. There should be a full tube.

Now, I was not in good form at this stage. Earlier I had tried to get my car out to take a load of tree branches to the local "civic amenity site" (i.e. dump). I loaded the trailer, attached the trailer to the car in the drive, and then I found that the car battery had failed. It started when I wanted to move it, but when I wanted to leave the premises it died completely.

It was 2C, snowing, and the car and trailer were stuck in the drive. Mrs FVM was in Glasgow, and the spare leisure battery in the garage did not have enough charge to start the car. Given that the dump would close later, I only had 90 minutes to use my 5 amp charger on the car. The mains voltage socket and plug for the charger would be out in the snow. Nothing else for it but to try.

It was during those ninety minutes that I noticed that the heat sink compound was not in the box marked "computer parts".

Surprisingly the car eventually started, but I had to keep it running for the whole time I was out and for that  reason I could not get to the shops to buy any food for tea. So when I got back and got the car back on the charger (now fortunately with the mains connections out of the snow), I had another hour or so to search before I had to walk through the snow to the village shop to buy some (frozen) food.

After tea there was another 90 minutes or so of searching for the heat sink compound.

In total this involved three searching sessions during which I tried:-

At this point Mrs FVM returned from Glasgow and ordered me out of the shack. By this stage the floor was littered with boxes and cables and I was in tatters.

After a few minutes I returned to the shack and repeated stage (1) again and then Mrs FVM appeared again and commanded me to stop. She said that if she made me a cup of tea and I settled down to watch "Australian Masterchef" I would remember where it was within ten minutes. I objected to this but decided the best bet was to give in. Anyway, I enjoy watching Australian Masterchef, especially on an elimination night. The compound would, inevitably, turn out to be in the box marked "computer parts", which is where it belongs.

After 5 minutes distraction it occurred to me that the tube might already be on the bench in the utility room and I might have set the computer in front of it. I went in and, yes, the tube of heat sink gunk was sitting right beside the computer.

While I had been standing beside the computer earlier I felt sure it would be in the shack, and I did not look around me. My excuse is that I was dealing with the car battery and anyway  ...

I have no excuse.

I hoped to get some sympathy from MM0XXL on the radio. He said helpfully that this is what happens if you do not put things back where they belong.

The (spare) tube of heat sink compound is due to arrive on Wednesday.

Then I will have two to lose.
The computer still is not working, by the way.

While I was hunting about I did find the microphone for the TS-590 in the "computer parts" box. Just was well as I needed it for the UKAC contest. I did wonder where that had got to. It certainly was not in the "microphone" box when I looked the previous day.

The sooner propagation improves and I have someone to work, the sooner I can forget about repairing things.