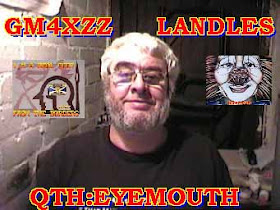 My thoughts are with Jan and his family.

However, it would be wrong, I think, not to mark Landles passing with a few more words.

For those of you who never met Landles, you may think this is a bit of a diversion. However, let me assure you that Landles was one of the nuggets of gold in our hobby. We all know one, but do we value them? Do we take them for granted and we will miss them sorely when they are gone?

Landles was a bear of a man. His QSL card above shows that. Tall, broad shouldered, with a rangy look, you might think he would make a good boxer. In fact he had retired some years ago from the cement factory where he worked. He described himself as "mechanic to trade, explosives expert by occupation".

If you ever take the train from Edinburgh towards London you pass through the cement works at Dunbar. Amid the industrial scene of rail wagons being loaded and stone being crushed, you cannot help being amazed by the huge hole in the ground. The railway is now on an embankment, with vast quarries on either side. This enormous scar in the rock was made by Landles and his colleagues over many years, created by steady blasting away of the shale. Landles knew more about explosives than anyone I ever met (well, since I left GI anyway).

He was an intensely practical man, in the way so many amateurs can be. It just came naturally to him, or so he made it seem. We shared an interest in motors and engines. We used to spend hours on the local repeater going on about Stephenson valve gear for steam engines (a particular love of his). He once surprised me with a detailed knowledge of the English Electric 12SVT motor in the British Railways Class 31 diesel locomotive (not a subject I know much about). His email address featured the name of a maker of early marine diesel engines in Glasgow. I knew I had a lot to learn from this man.

Landles had seen service with the Royal National Lifeboat Institution, maintaining the motors in the Eyemouth lifeboat. There was not much about engines he did not know, and we spent hours and hours monopolising the repeater talking about that. Or actually anything, including a detailed discussion of the route of the old branch railway line from Burnmouth to Eyemouth, or the Stirling engine, or meteor scatter. The scope of his knowledge was colossal. We rambled on about Bolinder semi-diesel barge engines, or a Lister-Petter engine I had found in a boatyard in Greece. Sometimes some other amateur would call in just to say they were amazed by the discussion, but leaving us to carry on.

When it came to radio Landles approach was simple. No fancy rigs, no complex antennas. He had conquered a speech impediment which he had from his early years. At first he stuck to CW, but later, after many years of effort on his part, he got over the worst of his problems and appeared on voice. Mastering his speech stands to his credit, and I admired him for the efforts he made. However, after his CW years, his first love remained data modes and in particular slow scan TV. He had been a part of the development of the FLDIGI software. He was so prolific on CW at one time he was one of those few amateurs who had his own envelope at the famous Box 88 Soviet QSL bureau.

He operated from a shed in his garden in Eyemouth. I would often bump into him during his daily walk, something we both did. When we were let down by an exam invigilator for a Foundation Exam, Landles cheerfully stood in. "I quite enjoyed that" he said afterwards, and I would have loved to use him again but the club decided not to have any more training.

I last met Landles on the bus to Berwick. He was off to Aldi to do his weekly shopping. We had a good talk about free over-60s bus passes, the band conditions, and what good value small retail chains now offer. That was it about Landles. He had a habit of turning up and engaging you in complex and wide-ranging discussions. It was as if your last conversation had been five minutes ago, or perhaps the conversations never actually ended, just had small gaps.

So you can gather I will miss Landles. His was a towering presence and he really knew his stuff. I respected him and I called on him when I needed him, and he helped in any way he could. When he heard I needed a grid dip oscillator, he turned up at the house with a grid dip oscillator. A true amateur.

I really value the friends and acquaintances I have in this hobby (though there are a few troublesome ones of course). But I think I need to value them more. They may not be around for ever. Landles' early retirement was cut short. He never got the chance to move to his beloved Tiree, where he loved to go for holidays.

Landles was my age and that does raise a certain unease about what I take for granted. This hobby is losing great characters, so we need to recruit some more. But really, Landles passing makes me value more all those of you who simply do your thing by communicating your ideas and working to keep the hobby ticking.