I have said it before and I'll say it again ...

It was not as if I had not had warning.

I do not do as others do. I do not look at Jet Stream maps, which as you know I regard as similar to looking at tea leaf patterns, feeling bumps on the head, and testing the dampness of sea weed. I prefer to look at the Solar predictions. I do this because it works for me. 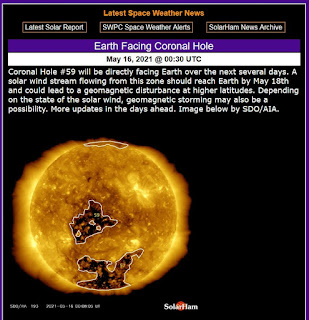 To me this means that I know on 16 May there might be an aurora on 18th and I need to look for Es that day and the next. This is especially so at this time of the year. Experience tells me that early and late in the Es season any major solar disturbance has the habit of generating enough ionisation in the upper atmosphere to tip things over into Es. At the peak of Summer of course Es just happens regularly, and during the Winter it takes a big event to trigger it.

There was not much sign of aurora here but on 18 May the K number rose to 4 and I had a few nice 4m and 6m Es contacts later on. It just proves the link to solar activity as on 17 May, just the day before this event arrived on Earth, I worked nobody at all.

Come 19 May I was on watch from 06:00 looking for Es and hoping for some activity on 4m and 2m. You never know. There is always hope.

Right from the start there was 6m Es, which is what you might expect as I worked a couple of stations in Italy with very large stacked yagi arrays.

I took the precaution of working some EA stations on 6m to be ready in case I could do the treble again. At 09:08 4m opened to Spain and  Sure enough at 09:46 I worked EA6XQ on 2m, for a new DXCC on that band, followed by EA6VQ for a new square on 2m. Later I worked them both on 4m for a station double into the Balearic Islands. Whether a station treble to one of these was possible I cannot say because it all got so busy that I rather lost track of 6m. In fact I lost track of everything, including allegedly "important" things like cutting the grass and fixing the back gate hinge. Huh!

As usual, click to enlarge the image if necessary.

The following two metre band opening lasted until 12:12, over three hours. From here it spread over time from the Balearics to Spain and France. The figures on 2m speak for themselves, 20 QSOs, 3 DXCC, 13 squares, and best DX to EA6QX in JM19 at 1878km. During those 3 hours and 6 minutes the area I could work moved around between the Balearics, Spain (Catalonia, Navarra and Bizkaia) and then a swathe up through France from the Mediterranean Coast near Beziers (1448km) north to near Angers (945km) and back again. It was amazing to witness.

New squares on 2m totalled 9 plus another one on 4m, with a 6m/4m/2m country treble to Spain and three station doubles, two to the Balearic Islands and one to Spain (EA2EVY).

I do not know what others were doing because I could hear only one G station. I could see DX replying to some people I can usually hear. I suppose that happens when everybody near me beams South.

This was the best 2m Es day since I moved to this location 12 years ago, and indeed the best I can remember. Perhaps not the best in terms of distance, but certainly in terms of coverage and duration.

Have conditions changed over the past 12 years? I doubt it. I think that the emergence of data modes has concentrated DX stations onto a single frequency on each band and this has made all the difference. There is no longer a need to search for the DX. And then the speed of completing a QSO had increased - first PSK took an age, then JT65 and JT9 took 6 minutes, and now FT8 just 90 seconds. With 2m Es being a fleeting thing, often offering only a minute or two to complete a QSO, these things matter.

For me, using digital modes during Sporadic E openings has made little difference to the way I operate. I was using them with FSK441 on meteor scatter for a decade or more before FT8 arrived. What it has changed for me is that others are using it for DX purposes too, and the scope for finding someone ready to work me has increased hugely.

As we study the science of Sporadic E in greater detail we can now have a better impression of what it is and how it develops. As more DX is worked a better picture emerges of how propagation is affected by the Sun's influence over the ionosphere.

It is true that data modes are soul-less. I certainly miss the familiar voices and the chat with people I have grown to know on SSB. However, there is nothing to stop anyone from using SSB, or CW or indeed FM (I did hear Spanish stations on 2m FM during this Es opening). The use of data modes in this rather extreme form of DX-ing shows, in my view, how amateur radio constantly develops and adapts to find the maximum distance to be covered. It is the same process we have followed for generations, whether that was the trans-Atlantic tests of the 1920s or the introduction of SSB, or the adoption of higher gain antennas.

If anyone still wants to yak reliably every day on with AM on Top Band I say, fine, off you go. But I won't be joining you. For sure I will spend a lot more days like 17 May (worked nobody on any band) than 19 May (pile-ups on 144MHz). VHF DX-ers live for days like 19 May 2021. They tend to forget the 17 Mays, though there are lot more quiet days.

I do not consider myself to be a true DX-er. I have no free standing 20m lattice mast, I have no huge stacked antenna array and I do not run "full legal" power. But does that matter? Even those with simple antennas like my 7 element can take part, and they make the many days of silence worthwhile.

If you sense enthusiasm here and in my last post I make no apologies for it. More on my quieter time on 23cms later. Much quieter but still fun.

DX can be fun, and as part of a balanced diet can result in boredom loss (as they say on the slimming product advertisements).

Now, back to the silence.