I have been out on my statutory walk
This lock-down thing is not so bad out here. I get to walk in places like this.

Katy isn't so keen though ...
I know that for a lot of people the insecurity is overbearing, plus the lack of work and money destabilising. It is better than spreading an illness though.

Luckily here I am working from home. I have been working from home since 1999, but rarely have I been so busy. Will I ever sell what I am working on? Who knows. But it does keep my brain cells going. So radio has had to take a bit of a back seat. It is always a tussle which work usually wins. I am lucky that I have anything I can do at the moment, and if you are stuck unemployed I sympathise. I remember what that is like too.

What I am saying here is that I consider myself fortunate and I know that many others are much worse off. Despite this, I only have my own furrow to plough, so I plough on.

I have received a very useful email from John M1BTR. He has done a sensible thing by contacting Icom UK about the DC power supply on the IC-9700.


Sequence delay is set for each individual band through:


The chap who phoned me says he uses a setting of 15mS for his transverters.
The preamp 12V lines are fused. A short will blow the fuse. It's a big job to replace them as a number of circuit boards have to be removed to gain access to the fuse(s).

Ah, SET - FUNCTION _ TX Delay. Why didn't I think of that? (Answers on a postcard not required). 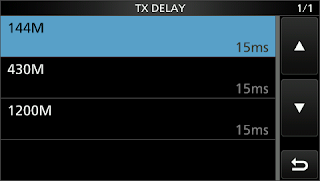 As you can see I have now set mine to 15mS too, though I did not find any SWR reaction at "OFF" anyway. Best to be safe here I think.

Again --- why did this not occur to me before? I had set this up on my IC-7100 6 years ago. I looked again now and I see that they are all set to 30mS on the IC-7100. I think that was for using RF Vox amplifiers made by RM Italy as I used to have those - in fact I still have two small ones kept for a future HF/VHF portable rig which nobody is making yet. 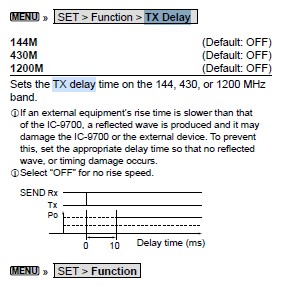 The reference is to avoiding SWR spikes on the IC-9700, which is fair enough in the 9700 manual; I am keen to have it to save damage to the "external equipment" as well and that aspect is not very clear.

Still, I should have known and clearly I did 5 years ago. I just seem to be finding the manual hard to comprehend.

John has provided the information on total current available and the fuses which is very important. I think that should be in the manual and if it is I cannot find it. The turn-off and warning I mentioned in my last posting may be in addition to the fuse. 750mA is certainly enough for my purposes. Even with one of the common generic preamps on each band they would only draw about 600mA. I imagine that fitting a fuse is cost effective from Icom's point of view and not everybody uses the power output facility anyway. I suppose that a re-setting fuse would just create a different set of problems.

So thanks to John for making a helpful contribution to this emerging debate.

Another feature of recent conditions has been that I have had 9 FT8 QSOs into PA on 4432MHz since 14 April. Many of these have been stations running quite low power and vertical antennas. I bet I could have done better if my antenna had been vertical. It also shows what happens when there is activity. I simply noticed these stations on PSK Reporter and then tried very hard to reach them when the QSB permitted. It took time and patience though.

On 23cms I have had another contact with Niels Erik, OZ2ND. My last one on 23 March was a bit scrappy, this time I worked him with no difficulty at all. That makes me feel a lot happier with my 689km distance record on 23 cms.

Outside the tropo lift I was pleased to work a new DXCC entity on 23 cms when I completed an SSB contact with GD1MIP on 11 May. Despite the dramatic reduction in passenger flights at the moment, there are still enough planes around to ensure some contacts via aircraft scatter. We had been trying for a while and I must say that my hopes were flagging. Andy's enthusiasm kept me going but I had just suggested giving up when he said "one more plane". So I explained I could only wait 2 more minutes. He was right, it worked. We could have had a longer SSB QSO from that one plane, but I had to go QRT. But still, another country worked on 23cms for me, bringing it to four (G, GM, GD, OZ) and seven squares. Thanks Andy.

Various others have helped the 23cm square count up and I appreciate their efforts too. The VHF/UHF section of the GMDX group have been very helpful in this effort. They are mostly focused on contests, which is not my primary goal, but we share a common interest in working each other so everybody gains.

I have made various improvements to the 23cms set-up, as mentioned before. Latest arrival is an ex-equipment Jenelec power supply. Sadly it has a dodgy electrolytic so that has gone into the "to do" pile. With work beckoning I doubt if it will be fixed soon either.

Not much Sporadic E yet.
=================================
Our First Minister continues to encourage us to "stay at home", and only to leave the house under certain clearly defined circumstances. I am following her guidance. Please follow best advice where you are because we do not want to have to go to severe lock-down..
73