I have been busy with more difficult stuff (more later) so here are a few odd tales to keep us going.

First some small success:-
A QSL for my first contact to Denmark on 23cms:-
As Niels Erik says, the two previous contacts on 144 and 432 MHz were good too. In fact I would have been happy with either on their own. This was our 19th contact, but perhaps the sweetest one for me.

I do like to receive a QSL card though the post. It also shows the merit in asking people to move up a band after they have worked you. You then have a reasonable chance that the propagation will also be good at the higher frequency.

Progress on 23cms:-
I have had a bit of trouble getting out on 23cms. You would not think this given the QSL card above, but I do not seem to be having the success I thought I should. I can hear better that I can be heard. Or so I think.

After a good QSO with Jeremy M0XVF I was amazed to hear Sid, G8SFA. Of course, to confirm my doubts he could not hear me. After emails and a long phone call Sid could confirm that I was not reaching him. So more work needed.

Thanks to some more encouragement from Jeremy XVF, I have been ironing out a few problems. I had been using some back-to-back N-type plugs to get around linking various bits together (just one on each band). The idea is to reduce the rats nest of 10mm diameter leads round the back of the desk. I have become increasingly wary of these.

Some came from David GM4JJJ with the equipment he left to me. I then bought a couple more claiming "not the usual rubbish". So now of course I do not know which is which.

I got even more  concerned when bits of the waterproofing seal fell out of one and looked decidedly dodgy in another one.

Not easy to photograph without taking the thing out into the sun and angling it like a telescope. Anyway this was the best I could do with it just pointed upwards (the sun never gets overhead at non-tropical IO85, in case you wondered). 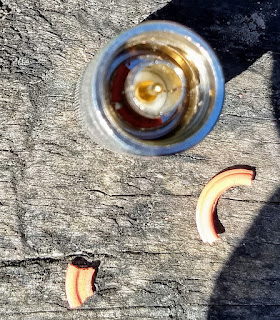 I doubt if this puts anything in peril, though they are supposed to be precision items.

So I went through and took them out and replaced them with short patch leads. Expensive but effective.

Then I tried to set up an arrangement whereby the switch from 2m to 23cms is easy. As you will know the IC-9700 does not allow differential linear switching. Also, since the RM LA250 linear arrived I have had to borrow my 23cm bias-tee for 2m. More later in this blog.

I now have a nice new SHF-Elektronic FSP-144 2m bias-tee for 2m, and so the general purpose one can go back to 23cms.

Anyway, with everything properly wired up on the 23cms this time so I could get going with a bit more confidence. The figures are a bit better. SWR down to 1:1.1, power output up to 53W. This is annoying with a 100W linear.  The root cause seems to be the IC-9700. As I have noted before, power output is only about 4W on 23cms. I am not sure why that is. I need to discover a reason, apart from the obvious possibility that my power meter is faulty. The little LED display on the linear suggest about 50% output, so I have that to go on ...

Buoyed up by all this I went on to the RSGB 23cm contest to give away a few points. I was pleased to work M0XVF and a couple of regulars, but also GM4BYF for a new one. I usually find the Edinburgh area a problem but not this time.

Then a strange quirk of the IC-9700
When I reviewed it I mentioned that the 9700 has two receivers but only installs one sound card in a computer. However, it does have two loudspeakers and two line outputs, leading me to the idea that I could rig up a second audio input and monitor two data frequencies at once.

EIDT. Thanks to Greggor (see comments below) I now know that the one sound card makes two channel audio available in the computer. This is not explained in the Icom manual. I will cover this in later postings but the other aspects of this post remain correct.

Well a couple of days ago I was trying to listen on 1296.200 while leaving the other receiver on 2m FT8. The 23cms receiver was set as active and 1296.200 was highlighted as the bottom (sub) VFO. The WSJT-X software was showing the frequency as 1296.200, though of course I was not expecting any FT8 as I was listening to 23cms on the loudspeaker.

Imagine my surprise when MM0CEZ popped up calling CQ apparently on 23cms. Or at least 23cms was the active frequency on the IC-9700. I could hear nothing on the loudspeaker. Curious, I decided to work him and sort out what was happening later. It quickly became clear that the WSJT-X software was controlling the frequency and showing the data contact on 1296.174, but I was working Peter on 2m. Whatever the frequency on the software (23cms), the signal was going out on the secondary frequency (but top on the display), i.e. on 2m.

I thought I should explain to Peter that this was a mistake as he is not exactly DX and he must have wondered what I was up to. He was very good about it and offered not to tell anybody if I felt I needed to keep quiet. After all, I thought, who would admit to working someone on the "wrong band"?

But this does seem to be a "thing". I set about re-creating it on the IC-9700 today. Would you expect this readout to produce a signal on 144MHz?


It might be nice if it was real as I would like to work PA on 23cms.

During this time I was listening on 1296.200 and the IC-9700 display was showing this...
The S/Po meter on the top (shaded) display shows RF output on 144mHz, whereas the meter reading on the 23cms section with the green mark shows an S-meter reading on 1296.174. The meters at the bottom below the 1296 readout do not relate to that frequency but to 2m data transmission shaded at the top.

There is nothing wrong with this. I think it does not happen if the frequencies are reversed between the top and bottom displays, in which case the data output would be on the same band as the software suggested. I just find it very difficult to comprehend.  I can select and listen to a VFO but yet while my computer is showing the same frequency it is also working stations on a different band as well. That WSJT should show a different frequency from the one it is using does my head in.

An outcome like this is inevitable as the 9700 only has one sound data connection to the radio (active on the top display), but it allows the CAT control to alter either frequency depending on which is selected. So I was able to change the lower highlighted readout from 23cms to 70cms and back again, and the WSJT readout followed, while the RF output continued to come from the USB signal from the computer on 144.174 (despite the computer and the highlighted readout on the 9700 showing 1296.174 and 432.174 respectively).

I usually use the 9700 as a single-band-at-a-time radio. I think, being a bear of small brain, I should stick to that approach.

I said when I first tried the 9700 that it should have been possible to take two separate audio feeds out via two separate sound ports (after all, it has two loudspeakers). The Elad FDM-DUO have several audio and CAT connections. This IC-9700 outcome I find bizarre.

At least Peter saw the funny side of being worked on the "wrong band".

And now for something just plain potty:-
I do not have any 27V operated relays in my relay box. I was offered some 24V ones a few years ago but turned them down as I could not think of a use for them.

It occurred to me that if I had a relay on the 27V DC supply to my 23cm linear it could switch the PTT between the 2m and 23cms linear. When the linear supply was on it would switch the PTT to that, and when unenergised it would connect to the 2m one. No need to plug and unplug the phono plug and lead as I had been doing. And it would be fail-safe as the 2m linear has RF VOX and the 23cm one passes the full 4 watts through. Just turning on the power supply to the 23cms linear would switch everything and no plugs to swap about.

Even better, with both the 2m and 23cms now having their own bias-tees I could supply both pre-amps from my single sequencer. Perfect, and they are now both off when either band is in use, which is good as it means they do not get RF shoved down them on the other band.

The thing is, no 27V relay. And no shops to go to. And even if I was not locked down there would be all that soldering. And I am busy as I have to work people on the wrong band and important stuff like that. And, I want no further expense right now.

Why not use anything lying about? The transfer relay I bought from GM4JJJ's SK clearance sale at the GM Microwave Round Table says "DC to 2.2GHz". OK, DC is a bit less than I had in mind but I can always take it out again if I need it. If I use plugs that is, with a non-solder solution.

I have a few dodgy N-type to SO-239 adapters. And some PL-259 to phono adapters. Drat, only two of each and I need three. Hey, I have an N-type to BNC (I wonder why), and a BNC to phono adapter. I have little need for these adapters as almost everything is now N-type. Why not use them for DC too.

And finally, the transfer relay had a 4 pin plastic plug which I have nothing to socket to it (as they said in the 1960s). I cut that off and added two banana plugs. Not that I like banana plugs but they have their uses. In this case to stick into the DC connection posts on the 23cms linear.
This must be one of the maddest bits of construction I have done. Well, not construction, more assembly. Does it look terrible? Yes. Does it work? Yes.

The elegant way to do this might have been to buy a 27V relay, which at this moment seems a bit mad. The way I have done it allows the valuable transfer relay to be removed at any stage. I could STAY HOME as instructed. And what was I going to do with those adapters anyway?

The even more elegant way is to build a single board computer to read the Icom CI-V line and switch the PTT that way. Don't worry, I am working on that one.