Japan on 2 metres, in easy steps

Here is a photo of last night's sunset, which has little particular significance to this tale, apart from signalling high barometric pressure and possible tropospheric lift conditions
Last Saturday (11th January) was interesting. Not that I set out to work Japan on 2 metres. It all happened in nine small steps.

Wiggling various cables revealed an erratic connection in an "Anderson Powerpole" plug and socket in the lead. Being an inhabitant of the European side of the Atlantic, Anderson Powerpoles came as a surprise to me. I had dabbled in electronics for over 50 years and never seen one before this linear arrived. Of course I had heard of them, and I had read of the idea that they were the perfect solution to every need and they never fail. Try as I might I could not save these ones, and they were consigned to the bin.
I cut off the shrunk-on boot and I could not find a way to tighten the crimp on the plugs, so I had to cut them off. Then it dawned on me that the boot had been hot. Was the linear running low output due to power starvation?
=========================
I AM GETTING THERE
=========================

As a bit of background I should say that this 70cms linear was bought from eBay second hand. It did seem rather cheap, and looking back in eBay records I discovered that the previous owner had bought it a few weeks earlier. This did not put me off, but it did make me wonder.

It had arrived with a few non-standard alterations. One was that it had an extended DC power lead, linked to the supplied power lead by the offending Anderson Powerpoles. The linear had Anderson Powerpoles fitted too and these were much heavier than the ones at the joint. I now noticed that the extension cable was a bit thinner than the original. So did the lighter extension cable and lower rated connectors combine to reduce the voltage, limit the current, and hence the power, to the linear?

Once I connected the shorter original power cable direct to the PSU I got 150W output. Not a bad improvement. So I got out the multimeter and checked the output of the PSU on its "13.8V" fixed setting. Hmmm, 12 volts. Turning it to adjustable voltage and resetting - 13.8V produced 180W output! Tah dah!

The TE Systems has four fans on top added by me. I am paranoid you know. Two run during PTT, and two on a temperature controlled switch, allowing me to monitor the temperature. This trends up to about 32C before stabilising. Would it get too hot on 180W and 13.8V, compared to 130W and 12V? Quick test, no sign of that, in fact it seems cooler on 13.8V (the fans run from a different supply so they were not turning faster).

As is so often the case I could find nobody on 70cms to test with. However, I noticed from PSK reporter that Colin GM0HBK was receiving DL7APV on moonbounce. Maybe conditions to the moon would be good and I could get a real test of the amplifier there.

Up on moonbounce DL7APV was POUNDING in. I did not wish to bother him as he was working a station in China and I worked him before ...

No point being in the shack and not having both parts of the dual band antenna working. If I am pointing at the moon I usually turn both bands on and listen. Why not? You never know. While I am on 432, I tend to set the 2m radio to 144.120. Theoretically, 120 is a sort of "calling frequency" but it is little used for that.

Whilst fiddling around between three stations on 70cms who were supposed to be operating (though I could only hear APV) I noticed that S51ZO was really strong on 144.120. I checked and I had never worked him, so why not give that a try?

Really strong in this context means -20dB, and I was something similar with him. I only have 7 elements and no elevation, so any contact is a good one. Mind you, the story goes that if you can get to the moon and back you can work anywhere in the world, as the distance is much the same. That never works for me, as on 2m I had only worked Europe. I did wonder a bit, because I have worked USA on 70cms EME.

Step 7 - If you post, you will be pounced on

I mean this in the nicest possible way - if you let people know you are on EME, they will ask you for skeds. And this time Juu, JH0BBE asked me to try to work him on 144.131.

Now I have had Juu ask me for a sked before and it did not work. Me? Work Asia on 2m?

Being a polite and civilised person, and a model radio amateur (as you all know), I would not refuse his request. Of course I will try,

On the face of it, given the lower power most Japanese stations run, there should be a chance of me working them on EME. When I see a US station I have a pretty good idea that they will be running 1000 or 1500W, and they need to be very strong for me to try my 300-ish watts. That is running my amplifier absolutely flat out, something I rarely do. But with Juu running 500W there was a chance.

Then he posted that he was hearing me. Eh? So I persisted. And then I decoded his call. Could this be happening? I sat there and watched, yes watched, the tell-tale double lines of the shorthand message RRR as it trailed down my waterfall. No need to decode it, I saw and heard it. Wow!
Step 9 - the QSL card

Juu asked for a direct card, which was off at the Post Office the next working day. And Juu's card arrived with me in just over a week. Three cards in fact. 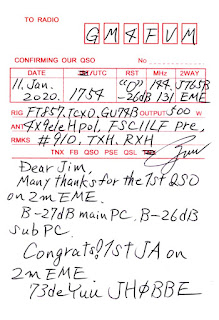 It might be my first JA in EME, in fact my first station outside Europe on 2m EME, but it is first contact number 910 for him. He has 2m DXCC, and he has helped me to continent number 3.

My report from him was -26dB, effectively RST 0. He could not hear me, but the software could decode me. For me he was officially  -27dB, but I both saw and heard his RRR, so that must be RST 551. My noise level is very low.

Summary
I never set out to do that. I set out that day to fix the dodgy connection on the 70cms linear. I ended up working Japan on 2m.

There is a program on UK TV called "24 Hours in Police Custody". In it, real-life ne'er do wells, rapscallions and perps get questioned by the police while we all look on agog at the shocking nature of their crimes. The thing is --- it is real. They often say "I never meant it to happen. It started simple and then it all changed and got complicated. I was swept along on the tide of events.". Well, that is what happened to me. 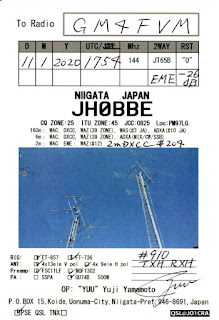 Finale
The next day, peering again at 2m moon bounce, I saw this:-

That was both sides of an entire QSO between S71ZO and ZL1HD.

I have never heard a ZL before during my entire amateur radio career. And now I hear one via 2m moonbounce. What a square RF82 would be for me.

Sadly, I had left the rig running and it recorded that event. I could not try a QSO with ZL because I was not in the shack. I had gone to watch .... Ski Sunday.