Round the microwave table and more doubts about radio.

I feel like a kid explaining why he has been late for school.

I missed the National Ham Rally as I was away. I was also away for the Fog of the Tyne Rally. I missed the Galashiels Rally because my car was off the road for a week to be fitted with a £900 towbar. A £900 towbar? That is new rig money for something used to haul grass cuttings to the local dump.

I had no excuse when it came to the Scottish Microwave Round Table last weekend (apart from being broke after spending £900 on a towbar).

I took the train to Burntisland, and the Museum of Communication is a short walk from the station there. There were 55 people there and it was great to meet Roger GM4PMK, Peter GM8GAX, Andy GM7GDE, Gordon GI6ATZ, Gordon G8PNN, Brian G8KPD, Eddie G0EHV, Norman G3ZWR, Jon GM4JTJ, Geoffrey GI0GDP, Barry GM4TOE, and Tom GM8MJV. Sorry if I missed anyone out of that list and I spoke to several more who I cannot recall right now. There was a lot going on.

In fact, despite the list people I did talk to, there were several more I hoped to meet but who escaped me as I circulated around.

It was a pleasure to receive my latest batch of QSL cards. Andy, GM7GDE, who is the RSGB QSL Bureau sub-manager for my callsign, had gone to the trouble of checking who would be at the meeting and bringing along their cards to save postage and time.

Being the sub-manager cannot be an easy job, and adding this personal element to his already excellent service was really appreciated. Thanks Andy.

The first talk was about Microwave EME. I have dabbled with moonbounce on VHF and UHF, but never on microwaves, so that was interesting.

Then we heard from Sam, G4DDK, about the technical aspects of the Icom IC-9700. Sam has written the review for practical wireless. I provided a link to Sam's article in my non-technical review on this blog here. Various things had changed since the review was written.

It was interesting to hear that some 9700 owners have still felt it is worth fitting an internal modification to the 9700 to give even more frequency accuracy than the 10MHz reference method. This involves swamping the 9700 master oscillator with a board soldered over the oscillator's shielding box. So although it does involve delving into the radio, no actual soldering of wires is needed as far as I can see. The replacement board couples inductively to the existing circuit and overrides the on-board master oscillator with a GPS or similar one mounted (presumably) outside the case. So far I find the 10MHz reference input to be fine for my purposes. So far anyway.

When prompted with a question about the single PTT output, Sam said that someone makes a CI-V operated outboard switching device, but he did not say who. I cannot find any reference to this item being on sale. Someone in the audience suggested using the DC pre-amp bias as a switch but I doubt if this will work as they are all on so that you can receive on two bands at once. I should check if they all go off on transmit or just the one in use for transmit at the time. If that did work, I would need to sequence all my preamps together on the PTT line.Also, can my sequencer supply enough current for all three pre-amps? Probably, yes, but I need to check. I would also need 6 bias-tees, two for each band, or do some surgery inside the case to reduce that to three.

The lunch interval provided a good opportunity for networking.

After that GM8IEM talked about constructing a 13cm home station around the Kuhne transverter. This was interesting, though 13cms is a bit far for me to think about when I am only just starting on 23cms.

Finally Heather, M0HMO, rounded things off by talking about SDRs and software for portable microwave operation. The idea was that a movement could emerge to provide a route into microwaves for new operators by utilising the latest SDR technology. This became a bit complex and I got left behind at times as I tried to interpret the jargon and initials in use. However, I got the gist of it and it seems like a good idea. I doubt if I will be mountain-topping soon though.

Neil, G4BDN, was presented with the constructors prize. The quality of his work is astoundingly good.

I also bought something at one of the sales stalls - an RF transfer relay. This is a possible solution to switching a linear amplifier I plan to use on 23cms. I say plan, but I have not decided which way to go on this project. Bert Modderman, PE1RKI, (site here), makes an interesting range of amplifiers, some of which might suit my needs.

Bert specifically states that you should not use transfer relays with his amplifiers. This is because they usually connect the input to the output of the linear on receive, opening the door to all sorts of problems.

Despite Bert's comments I still bought this one. 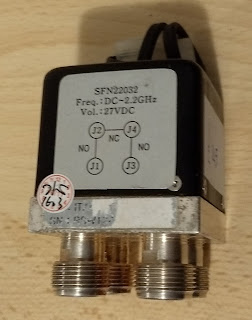 The diagram shows J1 and J2, plus J3 and J4, normally open as you would expect, but only J2 to J4 normally closed. So J1 and J3 are always open and I can connect my linear there and activating the relay will bring it into circuit. Otherwise that diagram suggests that the linear will be isolated and received signals can pass between J2 and J4 when not energised.

Well, so it says on the box, and checking it out with a multimeter suggests it should work. This was on sale at a good price for a transfer relay, but still rather expensive for me. I didn't have the money on me and I had to post a cheque afterwards to GM8GAX. Thanks Peter. I didn't have the cash due to spending £900 on a towbar, not that I am obsessed or neurotic about that. Oh no, I have forgotten all about that. Forgive and forget, I say.

This particular transfer relay came from a clearance sale of more items from David, the late GM4JJJ, so I guess he had the same idea as I did. I hope so anyway.

VK4GHZ's posting sets this out better than I could: here  http://vk4ghz.com/transfer-relays/

After reading VK4GHZ's posting I had been looking for one of these rather rare variants for some time. As I pondered it at the sale table, some helpful Microwaver pointed out that the next stand had a transfer relay for half the price. When I explained the unusual configuration of this one he looked blankly at me. The other one might be half the price, but it is not suitable for my plan.

But I don't have a proper plan for more power on 23cms. I have the rig, coax, preamp, sequencer, bias tee, antenna  and now the relay, but not the power amplifier. I am not convinced that the Bert Modderman route is the right way for me to go.

Here is the history for me. On every band I now use I have gone in barefoot or with low-ish power. Then after a while I have bought a bigger amplifier and in every case it would have been cheaper and easier to get the larger amplifier at the start.

However, I live in this twilight world of love/hate for radio. Every so often I want to go QRT and take up quilting. Or follow in my Granny's footsteps and try crochet. Making blankets is an Edgar tradition and radio isn't.
======================
I enjoyed the Scottish Microwave Round Table, and it was great to meet so many friendly and helpful people. I should be content but I am not. I cannot just throw money at a big linear for a band I hardly know. It might be a mistake not to buy the biggest boots I can find, but comfort counts in the boot world too.

I might be more comfortable with a small linear and make the same mistake as before. At least that will be simpler for me if I decide in a fit of pique to go QRT and adopt bear stuffing instead.

That is making stuffed toy bears, by the way.

Anyway, even if I do get into sewing and stuffing, I will always have the right transfer relay.