The equipment sale of a silent key amateur caused me doubts

Four or five months ago a local amateur became silent key. I shall not mention his callsign and I shall call him "Roland" here. I do not want to cause any distress.

Roland lived about 20 miles from me in the Tweed Valley. I encountered him 5 or 6 years ago when he came over the GM4FVM a couple of times to see my set-up. He wanted to create something similar as his interest was in VHF, and there are not many others round here doing that. So he phoned me a few times and then came and looked, and later built something similar.

When Roland passed away a fairly common situation arose. Basically his equipment was to be disposed of very quickly by people who did not really know what it was. At this stage I was contacted by his brother in law, also an amateur, to see if I could help. The initial questions surrounded Roland's IC-7100, the purpose of which was unknown to anyone. I went over and explained to his brother in law how it worked.

The next thing which emerged was that everything was to go, and as soon as possible. Roland's 10m Tennamast, 2m, 4m and 6m antennas, rotator and all associated metalwork was taken down and left on his front drive. I was asked about it and I quickly offered the Tennamast to another amateur in the area who I knew was interested in one. However, he only needed a 7m Tenna, so there were no takers. The antennas and the Tennamast were quickly scrapped.

This was a bit of a wake-up call. Coax and rotator cables had been chopped up to get them out of position. The cables for the IC-7100 could not be found, neither could the associated CD, nor various similar items. Large quantities of magazines and paperwork went to the local dump, so different items were being separated from their manuals. I was told that the rotator was headed for the dump.

Faced with this, I was unsure how to act. I did not want to see valuable items being dumped. Roland's widow deserved to get some value for them. The Tennamast had already been assigned for scrap. So I stepped in and bought the rotator, the IC-7100 and an old low-spec oscilloscope. I really had no need for any of these items, but I did not want to see them dumped. I then had to scrabble together a large sum in cash and hand it over, something we don't do much in these days of plastic money.

I had to deal with the issue of how much to pay for some things I didn't really want and I was not even very sure about their history. I had never heard Roland on the air - if he ever transmitted I never heard him, nor had I met anyone who had worked him. Had I not heard him because nothing worked? The amount had to be high enough to make Roland's widow better off than scrapping them or other disposal. I did not want to hear later that these items were sold off too cheaply. The scrap value for the Tenna mast might not have been zero but was certainly very low compared to its true value as a mast. The other items were headed for the dump.

I had to make it very clear that if these items were carefully marketed on eBay they might fetch more, and if they were offered for a straight sale to a dealer they might fetch less than that but more than I might pay. Either way was an option for the estate. In the end, as I say, I bought three items. Some other things found good homes, in particular a rather nice ATU. A couple of small high value items were rescued and remain to be sold, including a DMR handheld and an MFJ antenna analyser, but everything else was thrown away.

I apologise if I have got some details of this wrong, but it all happened very quickly, and a lot of it occurred outside my knowledge. I was not directly involved in most of it. However, it is clear to me that there was no plan as to what to do, and the need to do it quickly probably resulted in high value items being scrapped or thrown away.

Still, some good came of it. 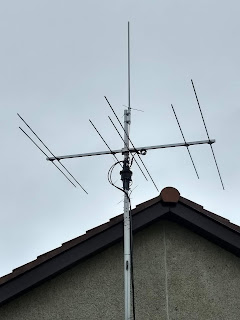 Roland's Yaesu G-450 rotator had to be hastily pressed into service yesterday when the azimuth sensing potentiometer in my G-450 failed. OK, it had sat in my garage for 4 months while I wondered what to do with it, but it came good in the end.

You may notice that my 6 metre antenna has changed again, it is now my old 4m/6m Vine dual band antenna resurrected. Why do I need 2 antennas on 4m? More on that later.

My original 450's pot should be easy to fix but it was very handy having a spare rotator to change over. The job only took just over an hour to do.

If I had any idea what to do with Roland's rotator it was to use the control box as the basis for a plan to use my EA4TX controller to run the G-450. I was working on that when the rotator pot failed. The controller plan wasn't going well by the way, as the voltage on the G-450 azimuth sensing line was very low and too low for the EA4TX unit to reliably measure. Never mind that for now.

And Roland's old IC-7100 is also in use. I did not need another radio. I still don't. The arrival of the IC-7100 might have seen it sit idle like the rotator. As it turns out, the IC-7100 is just what I needed for 70cms, and the rig sitting idle is my IC-7300. Who would ever have thought I would end up with a radio as good as an IC-7300 sitting here doing nothing?  It just proves that I did not need another rig.

The moral of this story? Well, Yaesu rotators break down --- NO --- the moral is that we do need to think about what would happen if we end up going silent key. It is the necessary result of being alive that at some stage life will leave us. Is it fair to abandon our nearest and dearest to sort out what we leave behind? Is a mountain of old gear easily sold off by grieving relatives? Can we provide for this in some better way?

I read an article on this subject a year or so back in QRZ.com. Somebody who had acted for two widows in selling off SK gear had written to say that we should be better prepared. He acted in good faith, and one widow left him to it, the other demanded cash receipts and detailed accounts and justifications for each sale. In an slightly older local case, a couple of amateurs who acted in good faith were later accused of feathering their own nests. I certainly thought they paid fair prices for piles of old and uncertain gear, but the widow later accosted one of them in the street and accused him of under paying. It left everyone feeling uncomfortable.

So I ask this general question - if you were to die tomorrow, would anyone know what to do with your gear? Would they even know what it is? Shouldn't you write down what it is and what to do with it? Should it go on eBay? Should it go to a dealer? Is any one person to be trusted to sell it off? And what if the trusted seller want to buy some themselves? What price is fair then?

I fell sad about the way that Roland left this world. His carefully assembled radio shack was never used for what it was designed for. What did he do in his shack for all those years? His expensive cables were cut up. Some of his gear could not even be identified by the people sent to remove it.

Perhaps it was inevitable that a lifetime's collection of Rad Coms went straight to the paper recycling section of the local dump. But some things that others could have re-used were scrapped. If more had been known, and more time spent on it, I believe that more money could have been recovered. But perhaps more importantly, some gear could still be being used.

I hope that Roland takes a break from operating in that great shack in the air sometimes to look down and see his rotator turning my beam.