Good blogging and the data mode take-over (not)

I like a good blog. I enjoy reading the thoughts of somebody who cares about their hobby and shares their thoughts with us.

One I have mentioned before is Olli's, DH8BQA, here www.dh8bqa.de/. You can find a link to it on the right hand sidebar too.

Olli is very good at saying the right stuff. He is also direct and to the point, not like me who rambles. He posts occasionally, not too often as I do. He has interests in a mix of subjects from VHF to HF, which makes it interesting.. He does contesting, which I don't do. I find that interesting, and I even hope that Olli will do well in contests because he is "on my side" thanks to the blog. That way I can do contesting without actually doing the work.

We share enough interests to keep me looking at his blog from time to time. The shared interests extend to the 10m band, tropo on VHF and many other things.

Back in October Olli added an interesting coda to his posting about the conditions then https://www.dh8bqa.de/golden-october/. His remarks have been spinning around in my head, and I have been waiting to sort them out before posting something myself. Here is what he said about FT8 ...

While I see it’s advantages and therefor use it, too, I really hope it will not be FT8-only in the future because people are just too lazy and make it easy by just clicking around a bit on the computer screen (if at all and not automating things, automated QSOs are just machine to machine, this has nothing to do with amateur radio anymore). As long as it is just complementary I’m fine with it. If it ever turns to FT8-only (yes, there are signs of it

) I’ll certainly need to search for another hobby. And that’s from someone who is burning for our hobby … but let’s think positive.

I agree with Olli on this. I have given it a lot of thought over the months. I think my viewpoint on FT8 comes from someone who has been using data modes for several years. OK, I was using RTTY in the 1970s, but I do not mean that. PSK came afterwards and pretty well rendered RTTY obsolete (I am ignoring several other steps here).

When I really got into data modes, it was to do things which other modes could not do. That was:-
WSPR - low power propagation study
JT6 and FSK441 - meteor scatter
JT65 - moonbounce

Possibly because I have never trusted my morse code skills I turned to these data modes as a positive step to explore the potential of our hobby, not to replace SSB and FM.

It turned out that JT65 and JT9 were useful on 6m and 10m for fading long distance contacts, but that was a side issue. I never saw data modes taking over, and I hope they never do.

When MSK144 became available I stopped using JT6 and FSK because I found what Joe Taylor said was correct - MSK is better. When FT8 appeared I started using it instead of JT65 or JT9 on terrestrial stuff and now I keep JT65 for EME and beacons. Simple, I have not changed my methods other than updating the protocols as new ones come along.

Then recently I heard this mad howling from offended traditionalists. It turns out that they never noticed me on JT65 but now I am on FT8 I am a threat. Well, not me so much, but hoards of folk who think that HF = WSTJ-X = FT8 = data modes. NOT TRUE. WSJT-X is a resource of several protocols for various purposes, I have been using it since WSJT-X 1.3, and there has always been a lot more to it than one mode.

It turns out that newcomers are using FT8 in their droves, and this may or may not pose a threat to the world of amateur radio, or maybe the world in general. But how can I be part of that threat when I haven't changed? I have been using data for the majority of my contacts since 2010, so nothing new there.

So what is different is not that enthusiasts are using data modes for doing things that voice cannot do, but they are using it more widely - and getting further at the same time. And I can see the issue. When I tune to 80m or 40m the FT8 segments are totally overcrowded. There are signals everywhere, and most them seem to be doing exactly what can be done easily on voice modes. Of course, they are perfectly entitled to do that.

I say again, I agree with Olli. A fully FT8 world would would be terrible. I still use FM to talk to my pals, and I use SSB in contests. Sometimes I just use voice (because I want to). I find the mass use of FT8 on HF soul-less and rather pointless. Sure if I am in search of DX then FT8 offers advantages, but for QSOs round Europe on 40m? Even top band, that chat band par excellence, is full of signals relentlessly exchanging callsigns (is anyone home?). They would be better, in my view, changing over to WSPR and going to bed while leaving the rig on. If all you want to do is exchange callsigns you might as well give up.

I do WSPR and pour over the charts looking for patterns. I use FT8 on VHF probing the edge of the tropo or Es. But using FT8 just for local contacts? Come on! This hobby is supposed to be a challenge, or at the very least, an exchange of ideas. What personal growth can come from routine machine exchanges?

Am I saying that I am better than them, or that they should "do as I say, not what I do"? I do not think so. What I am saying is that I think a moon bounce QSO from here to North America, or one discovering winter Es on 6m, is more meaningful than 100 "Inter-G" data contacts on 80m. You can disagree with me if you wish, but I really cannot see the point of using a strict mode which limits your interaction in a general chat arena.

I bet this is fashion. Or at least I hope it is. I expect that a lot of people are just trying out FT8, and as they are only on 80m, then obviously FT8 is busy on 80m. I suspect that over time 80m FT8 will become the preserve of DXers and enthusiasts, and the bulk of the activity will move back to SSB or CW. If I was on 80m on a regular basis I bet I would have done the same. I do not blame FT8 for being popular, but I think that over time it will reach its own level (and mostly amongst the DX enthusiasts).

There are all sorts of doom-mongers around in this hobby. For example, they predict that digital voice modes and network radio are going to kill our hobby. To these people I say "nonsense". Our hobby has to be attractive to people, and if something else is more attractive then off they will go to those hobbies. We need to win them over, not blame them for making a logical choice. They said the same thing when VHF-only licences arrived in the 1960s. Then it was said that many people would go onto VHF and never bother "advancing" to HF licences. But I did. And today new entrants may well go into network radio, get a taste for communication, and see amateur radio as their next step. In the meantime, established amateurs are using network radio to support their needs, and attracting people over from there. Network radio can be the recruiting ground for amateur radio, just like CB was years ago.

Like those in the Navy, we in amateur radio are in "The Senior Service".

And, in my case, proud of it. Aye aye, Captain.

I think I have been moved to write this because a rather boisterous local told me that he had worked 500 stations on FT8, as if that required a medal or a certificate.We do not weigh our QSLs to see how many there are, we look at each one and judge its significance. One good QSO is better than a night full of clocking them off routinely on 80m. For me anyway.

I need a photo or the thumbnail of this post will look bare. Here is a photo of an IC-7100 with a nice new N-type socket added to the VHF side ... 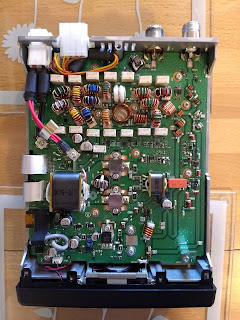 ... haven't we seen this before? No, because this is a second IC-7100. Do I need two IC-7100s? Probably not, but another one has appeared. Once it has proved that it works perfectly I may sell it on. It was in need of some TLC, new USB lead, firmware upgrades, and general tidying up. So far so good.

My FT-817 is seriously clunked. Its processor keeps locking up and while a reset brings it back, not for long. Unusually for me, the arrival of the second IC-7100 comes at the right time. The two things were not connected, but seem to fit together. Now, is the FT-817 worth fixing? The 7100 is vastly superior.

What does annoy me, still, is that the only place I can find an N-type panel socket with two holes is at Radioworld who charge £10 for them! Grrrr. I have plenty of 4-hole ones, but RS and eBay have none of the 2-hole ones. £10 for a socket. That is crazy.

D'oh. Am I ever likely to need another 2-hole N-type panel socket? No.

I said that the last time.