This takes me right back to the day I received my first QSL back when I was a short wave listener. I am not an active collector of QSLs, but they do have a certain fascination for me. 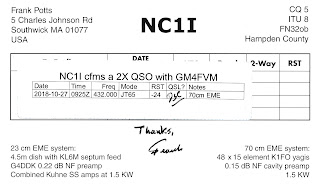 Thanks to Frank for the direct QSL - mine was already in the post.

Right enough of that.

I have had quite a few comments about my posting on 1970s VHF.

It is interesting that Jan, OZ9QV seems to have had a similar experience to mine. Clearly this is a widely found phenomenon. Jan fell on his feet by getting an IC-202 (in fact the full set of 202s). I never had an IC-202 but they seemed to be the portable rig to have. In the early days everyone really needed to hold their nerve and not buy a Liner 2. We all knew they were terrible but nobody then knew what was coming next - the IC-202 was much better. We still do not know what is coming next.


Tim 4X1ST had an IC2E as well as an IC-202. The IC2E represented the next step for 2m FM radios in that they then progressed away from crystal control entirely and we suddenly had thumbwheel frequency setting. What an excitement that was. I had an IC-240 mobile rig which used a pre-set diode matrix to produce an old-style crystal-type selection knob. The idea of the IC-240 was to look like the IC-22A crystal radio which went before it, but to save on the crystals. What had changed under the skins was that Phase Lock Loop technology had freed us from crystals.

Prior to the PLL we struggled to afford crystals. Although the radio magazines carried advertisements from companies who would etch a crystal for your desired frequency, this service did not come cheap. I recall that in 1977 I bought something called a Ken KP202 hand portable. This was in an attempt to get better performance than my previous Trio brick portable. The drawback was that the Trio had been second hand and came with crystals, whereas the Ken was new and I had to buy them. I struggled to pay for them. This added to the fact that the Ni-CAD batteries were dire and unable to keep the Ken anywhere near its stated 5W output meant that this thing had a short life. If only I had known what was coming next ...

Thanks to David, GM4JJJ, we have a time line of equipment which clearly shows how things changed. He went on to an FT-290 which was rather like an IC-202 on acid. The FT-290 moved on from the VXO to a sythesiser which mimicked a VFO, though with distinct steps.

We are getting ahead of the 1970s here, though it is interesting to note how things developed. Once we had the Liner 2 the mould was broken and progress quickly produced better equipment, first with a wide VXO (the IC-202) and then something which came close to a VFO (the FT-290). For FM gear the compact crystal radios quickly gave way to first wide step PLL synthesisers and to a period where mobile radios resembled crystal control but under the covers had dispensed with the rock-bound concept entirely. LED displays were expensive and not very practical in cars (I recall that Trio had a nice one). The present situation whereby you could programme your FM radio with the necessary channels and scan between them was still a way off.

Getting from what went before to what we had by the end of the decade was a tricky business. In my NBFM Manual, published in 1974, (price 90 pence, I recall going to Doughty Street to buy it) by G3TDR and G6JP, a lot of time was spent explaining to operators that (Narrow Band) FM was not as bad as they might think. Obviously there is the drawback of capture effect, which I seem to remember was the often quoted reason why AM old-timers hated it. The authors had a lot of reasons to say that the benefits of FM outweighed the drawbacks. There was the "relative freedom from interference to television, radio and audio equipment", and of course "excellent rejection of impulse noise". They went out of their way to stress the efficiency advantages of having an output stage running at full power all the time rather than just during speech peaks. This was a definite attempt to sell the benefits of FM to the amateur community.

They drone on about how most amateurs of the time know FM only by receiving stations using slope detection. They rightly say this is inefficient. Pretty well all of those stations using HF receivers and down converters were set up to receive AM, and they tuned to one side for FM. Slope detection worked, but badly. All those AR88s, R1155s and B40s in use by the stations I worked were hampering the operators. Slope detection was a bodge. The authors of the book say that "nbfm can yield results equal to am over a given signal path provided a proper limiter/discriminator is used in the receiver to obtain optimum performance with nbfm".

Looking back, I see the classic situation. It was rather like getting away from spark, changing from AM to SSB on HF, and even a bit like today with the emergence of advanced data modes. People resisted. They preferred the established order of things, even though it was limiting them. Back in 1970 this was not a simple change - it was from valve to transistor, from surplus to amateur gear, from old to new, and from home-made to imported. The picture of an amateur in his lonely shack lit by the dim lamps of an AR88 with its unique smell (I used one!) was a romantic one, whereas a tiny Japanese box with two pots and one knob on the front hardly seemed proper.

"Why change?" they asked me, and I struggled to answer, though I knew that it was more efficient and, quite simply, they could work greater distances. This is still my answer to those who doubt the point of data modes. I wonder do they too cling to some idea of the amateur as a romantic figure saving lives at sea or ready to clip on their leather helmet and go into military service, morse key at the ready.

For me it all boils down the question of "what amateur radio is for?" That is still the question that nobody asks today. If this is supposed to be a technical hobby to allow us all to learn, then we need to confront the sort of technical problems that face today's radio world. I doubt if many people training professionally in the science of radio spend much time on ex-Admiralty B40s, splendid as those radios were. In the 1970s they needed to know about FM, repeaters and minaturisation. These days no doubt it is about data communication. Everybody needs to know about propagation. Unless you push yourself you never learn much. So I think that the hobby MUST keep up with technological trends or there will be no learning, and then no hobby.

Those old guys in the 1970s didn't know much about propagation and they didn't want to know. If they could work to the other end of town that was enough. That is not self training of the licensee, that is just talking on the radio. Now we have network radio for that. I still hear those old views today from some those who I speak to, but then again most other do realise the need to modernise.

Even the NBFM manual has something to say about SSB. "it is often said that amateur radio is progressive and this is broadly true - the relatively rapid change over to the single sideband mode on the hf bands shows this to be so. This being the case it seems strange that the amateurs have been so slow to change on the vhf and uhf bands but it is true that a fair amount of ssb is beginning to appear after many lonely years for the early operators". That was 1974, and within about 5 years the change away from AM was complete.

With the arrival of FM, miniaturisation was down to the changover in architecture rather than a sudden move towards smaller components. FM radios did not need high level modulators like those needed for AM. The PAs could be tailored to the constant output power and heat sinks sized accordingly. Gradually better devices appeared and in due course integrated circuits became common. However, to start with, much miniaturisation could be achieved simply by having well designed amateur equipment rather than ancient commercial cast-offs. The mobile radio industry (PYE etc) was already producing smaller more efficient radios but he amateur community only used their 20 year old products.

And so we move on to today. Perhaps we need a modern alternative to my 1970s MBFM Manual. This would try to encourage modernisation amongst radio amateurs now, just as it did then. Of course the technology is entirely different, but the point is the same. We need a shake up every so often. It is great to look back at the "good old days", but that is what they are, old days.

Having said all that about efficiency, the 1970s switch to modernity was largely product driven. A plentiful supply of compact, efficient, affordable rigs built on new technology, be that the FM or the SSB variety, and that took away the logic of sticking with the old museum pieces. Will the Icom IC-9700 do the same for software defined radio as the IC2F and its ilk did for FM? I certainly hope so.
I have complained before here about the dearth of radios for serious 2m and 70cms work. There seem to be plenty for FM and digital voice. Until recently for SSB and data modes there was the outdated Kenwood TS-2000 and the £3000 Icom IC-9100. Excluding mobile rigs that only leaves the Yaesu  FT-991 which has issues. Now we are getting more details about the Icom IC-9700. From what we know so far this is a software defined radio which looks much like the IC-7300, but covering 2m and 70cms. It also includes 23cms using a built in transverter-type arrangement. So far we believe that it runs 100 watts on 2m, 75W on 70cms and 10W on 23cms.

I was expecting to complain that this radio was out of the financial league of most radio amateurs. I was wrong - again. Now we hear that it is predicted to cost £1795.95 in the UK, this being provisional (no doubt depending on what BREXIT throws at us in the meantime). At that price it is certainly not cheap but it is a lot less expensive than I would have expected. Rather like the IC-7300, the launch of the 9700 may be Icom once again bringing the benefits of SDR to us at the right price. Other manufacturers seem to view the easier to make SDR technology as a reason to raise the price.

Is the IC-9700 likely to be as revolutionary for 2m and 70cms now as the Liner 2 was on 2m back in the 1970s? We do not yet know. It could be that it is the next generation of SDR equipment which will make the difference, just as the Liner 2 was followed by the far more effective products which arrived over the next 5 years.