There seem to be two themes on this blog (apart from "I'm right and everybody else is wrong", but that is what blogs are for). They are

1) our pre-conceived ideas are wrong so we should try this,or

2) my preconceived ideas are wrong and I am a chump myself for not trying sooner.

This posting is rather about the second type.

This is not an Earth-Moon-Earth capable 70cms set-up. Or at least, it isn't designed to be. It is designed to be vastly better than no setup at all. Adequate, not excessive.

Erm. I was wrong about that. Clearly, it is EME capable. Or perhaps "it isn't designed to be" was my wishful thinking/ get-out clause.

OK, lets get this straight. I still think my 70cms set-up should not be EME capable. To review:-

This is not world class in any way. The IC-7100, admirable as it is, is a mobile rig. I have cut corners - if I had wanted to go for EME I would have bought a 300W linear and a better pre-amp, but the extra cost (£900 !!!) put me off that entirely. I used existing coax which works on 70cm OK but it not earth shattering. I could have reduced the RG-213 to 3/4 or even half its length if I really wanted to - or replaced it entirely. And, lets face it, a 12 element compromise yagi is hardly up to 70cm EME muster.

It is talk like that (the last paragraph) which I criticise others for using as justification for not trying.

Just because it looks difficult is not reason not to try. 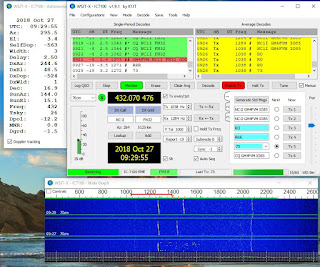 It wasn't a plan, this 70cms EME thing. At least, there was no plan until I heard NC1I. For the past couple of weeks I have been trying aimlessly to get back into 2m EME and failing. Conditions have been poor. Then on 6 October I noticed Bernd, DL7APV, mention on a chat room that he was working on 432. I went to the frequency and heard him so I reported that and he suggested that we try a QSO the next day. It didn't work. Back to square one.

Bernd has what I would call a "Super Station". 128 x 11 elements. That is pretty big, and it is able to elevate, which puts my 12 elements fixed horizontal pretty much into the shade. Why was I not able to work him on 7 October? After a bit of pondering it dawned on me that my antenna is best near to my moonset when the moon is close to my horizon, and at that point Bernd has passed moonset and cannot see the moon (at least for now). If I could elevate my antenna I would be in with a chance. Or I need to try with somebody who is still seeing the moon at the moment when my antenna is working at its best.
My immediate reaction to seeing a 33dBD gain antenna is to run away and hide. My antenna has about 12dBD gain. However, I knew I needed to stifle that feeling. The two figures add together, it isn't a competition. Anyway I did not work him, though he said that there was a contest on 27 and 28 October and he would be on for that.

Come 27 October if I had any hope it was of, maybe, working Bernd.  The same problem arose - as I do not have an elevating antenna he was weak and had dropped out by the time ground gain had started to make my signals to the moon stronger.

As it happened my usual EME chat room was off the air. I decided to call CQ. I was using Live CQ to keep an eye on what was happening and I picked what seemed to be a clear frequency. By another chance I was 1kHz away from NC1I who was clear as a bell. This is a bit of a dream of mine on EME - stumbling across someone I can immediately hear. It isn't so unexpected; on looking up NC1I  on QRZ.com it turns out that he has a Super Station and runs 1.5kW, or at least he can run that much.

So I thought it out. If he has 1.5kW and I have 95W, that is going to give him say 13dB advantage over me. I can hear stations down to, say, -26dB so he might hear me if I heard him at -13dB. At the start he was -16dB. At one stage I went out and raised my antenna height as I feared that the moon would disappear behind the roof ridge, but it turned out that raising it took about 6dB off the signal - it was better lower down. Ground gain and height advantages produce funny effects and my antenna height is not that important when it comes to the moon. Of course, I still thought it might be. So the plan was to keep the antenna as low as I could and stick it out until the moon fell low enough towards the horizon for ground gain to give me a chance of working NC1I.

I started calling NC1I at 08:24. He finally heard me at 09:25. I was calling for an hour and during that time I had all sorts of doubts, in addition to the antenna height issue above. Doubts about antenna direction and whether this contact was possible at all or not. I had many doubts about Doppler effect and whether I had factored it in properly. Then, as the moon fell below 4 degrees (and all the other European stations had lost the moon below their horizon) NC1I's signal started to climb up each segment -13, -12, -08, -04 ... so it was easy to see that ground gain was coming to my aid. Also. my antenna was beginning to function better as the moon started to get closer to the horizontal angle at which the boom is fixed.

When I called at 09:24 I knew immediately as soon as NC1I replied that he had heard me. Even though it took a minute longer to receive the signal and decode it, he must have clicked on my callsign. His frequency moved about 150hz, the amount I had miscalculated the Doppler effect. He must have seen me. And then ... well it just went like a normal QSO. Nothing special about my first trans-Atlantic EME contact.

After the contact he was calling CQ and within fifteen minutes he had disappeared entirely. Moonset had arrived. 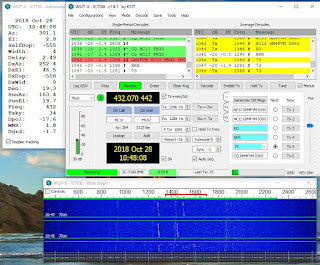 This time I left it until the moon was lower - under 3 degrees elevation. I was risking moonset behind the hills. The result was the same though.

I know that logic comes in here - if I hear a station at -15dB and he has a 13dB advantage over me on transmit, then he is likely to hear me at -28dB. Add to that the fact that his receive station might have a better pre-amp and receiver than I have (almost a certainty). Thus he WILL hear me. The EME path is usually steady and I bet he lives somewhere which is electrically quiet (like on a ranch!). Still, I never really expected him to reply both times.

As for the distance (5133km on six figure locators) ??? Well, logic also tells me that if I can reach the moon it hardly matters where on the world my contact is. With an indicative path distance of 752,034km on 27th (a mere 747,302km the next day) it matters little which of us is where on the Earth. Still, working round Europe has seemed a lot easier than reaching the US on 2m. On 70cms my lower power is more or less balanced by more antenna gain so my ERP is much the same, so why am I surprised to do it on 70cms first?

Lessons to learn? I am often wrong. I can even believe my own negative script. 95W and 12 elements did do it and I suppose if I had done a careful budget I could have worked that out in advance. Still, my job was to make my tiny signal reach him, which involved sticking at it until the ground gain kicked in, not raising the antenna too high, paying close heed to the moon's movements and not allowing my doubts to overwhelm me.

Here I go again. "I am surprised by those two contacts"

I should have tried this ages ago.