There was an aurora here on 20 April. Rather than actually making radio contact with anyone (I heard OZ, GMs local and on Orkney, beacons in GI etc...) I decided to use my time to try to get a decent image for this blog.

For those who cannot imagine what an auroral radio signal sounds like, this blog is not going to be much use. You can find some auroral recordings on the Internet, and there are even some of GM4FVM out there.

Instead I shall try to show a beacon received via aurora on my JT65 waterfall - in this case GB3NGI the 2m beacon on the Antrim Plateau in Northern Ireland...
Here you can see the the wide traces of the beacon as it switches every minute between JT65B and its CW identification. I was pointing my antenna at 22 degrees, the azimuth angle which seemed to give the strongest AU signal at the time. Despite the beacon being at 253 degrees there is still just enough signal coming directly from the beacon to show up to the left of the auroral signal.

Note how strong the AU signal is. Also it is Doppler shifted by about 400Hz (from the direct carrier to the centre of the distortion) in this instance. This is on 144MHz; the Doppler shift and distortion are less on 70MHz and 50MHz, and on those bands SSB contacts are practical with a bit of care. Trying to have an SSB QSO on 144MHz with this going on is a struggle but certainly worth a try.

EDIT I now notice some aircraft scatter too, on the faint direct signal at 16:41. This has produced the slanted lines due to Doppler shift caused by the moving aircraft.

Then I tried to swing the beam, first pointed at the peak of the auroral signal, and then direct at the beacon:-
You will probably need to enlarge these images by clicking on them. They will not look too good on a phone, probably better on a PC or laptop,

Anyway, the bottom 4 traces are showing the signal when I beamed North at the Aurora, and the top two when I turned the beam West to the beacon. Obviously the signal via the aurora is seriously distorted.

You can see the difference clearly on the JT65B signal which was sent during the even minutes:-

It is easy to see the modulation on the direct signal, on the auroral signal the distortion completely hides the tones. This is what makes it so difficult to use data modes, or even SSB, during an aurora. CW turns these wide signals on and off, and despite the absence of any tone, it is just about understandable. Any effective data mode might need to have on/off switching which would make it very slow compared with JT65. PI4 is a beacon mode which does work during aurora, in some circumstances anyway.

Also interesting is the effect on the CW ID coming from the beacon on the odd minutes:- 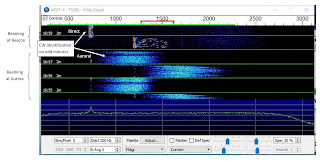 Here the wideband distortion is almost as wide as the JT65 section. However, you can see the CW callsign being sent, which causes a slight break in the wide signal. That is where auroral CW QSOs are made, by turning on and off signals which are hundreds of Hz wide.

Then I realised that I somewhere I have a drawing of what I planned, and basically the photographs should be most of what needs to be included ... 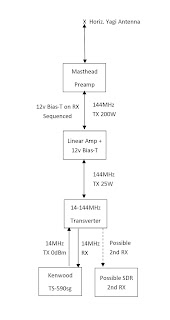 That says it all about the connections really.

This photo shows the TS-590 configured to run the transverter, with the display showing 144.429.2. The only issue with setting the tx frequency display to show directly on the 2m band is that then it only shows down to hundreds of hertz, rather than tens of hertz which is the normal resolution. As I often use data modes which give the full readout this is not much of a problem.

To open the transmissions up to the full 14 to 16MHz range required to cover all of the 2m band I had to modify the TS-590 to allow it to transmit across the entire 2MHz range.

The modification is well described on the Internet. It involves removing a link ("zero ohm resistor") from one of the boards inside the radio. As this is a surface mount device it is fairly difficult to find and I asked John, G1VVU, to help me. It turns out to be fiddly, as not only is it small but you need to lever it off the board and unsolder both sides at the same time.
If you can see it there you are doing fairly well. The screw heads give some indication of scale, and they are tiny too.

Once liberated it shot off into the depths of the radio. John retrieved it under his finger nail and offered it to me so that I could keep it for later. I did not keep it as any hope of getting that back in there is lost. My eyesight is not up to it. It is minuscule - I knew that SMD devices are tiny, but I do not often have to work with them.
Anyway, after that the TS-590 is free to send 1mW down the coax to my transverter, all the way from 14MHz to 16MHz.

I think that I can hear in the distance some of you saying this is a very complex road to go down just to improve on the Icom IC-7100's performance. Well, maybe, but what is the alternative? We shall have to see how the new IC-9700 works out, but transverters are still the method used by most amateurs who want to have the best chance of working weak signal traffic on VHF and UHF.