November is another time of the year when, in addition to nice meteor scatter contacts, I can find Es openings by using the data available for aurora watchers.

There is nothing especially new about this, I do it every year. The first step in the process is to forget the constant barrage from amateurs who have "found the link" between Es and the weather, the sea temperature, Alpine lightening and so forth, and return to the more generally accepted view that the ionosphere is affected principally by events on the Sun. Particles (and radiation) from the Sun have a major influence on the ionosphere.

I hasten to point out that the weather does have some influence on Es, as to some extent wind shear is a factor. But none of the theories put forward so far seems to work for me in a predictive sense. I can do without theories which look backwards and explain how the events occur after they have happened. This is interesting but not very helpful when you are trying to fit radio into your already busy life. I like something that tells me when something is likely to happen (in the future!).

When there are strong events on the Sun this often produces auroral propagation here, and I enjoy that. But less powerful events also make for nice Es which most people miss. At one time I just stayed tuned to 144MHz and listened for aurora, now I enjoy contacts on 10m and 6m Es while waiting for any possible aurora. Often there is no aurora here anyway. So my time is not wasted.

November produced a few of these events, as it often does. It is not helpful to look at sunspot activity as a predictor here. There is some vague link - auroral activity is said to peak two years or so after a "solar maximum". Fortunately for mankind the Sun is always active and many very good events can occur at any stage of the solar cycle. There are mini-eruptions, and a huge variety of disturbances and small irregularities on the Sun which have an affect here.

So I look for raised solar wind speed predictions. The polarity of the arriving material seems to have little influence. Some very nice Es openings have occurred when the "Bz component" (an element of the Solar wind's three-dimensional magnetic fields which tends to encourage radio auroras when negative) is either positive or negative. Sometimes I wonder if positive Bz is not better for Es and worse for radio aurora, but I have no strong evidence to make a conclusion about that.

Anyway, enough waffle, what happened? After rambling in my last post on 24 November I decided to try out 6m Es. I could see that "space weather" was disturbed, with high solar wind speed. The "normal state" for the GOES low energy Xray flux level (the lower blue graph) is so low that it often disappears off the bottom of the logarithmic chart. However, in the period 22 to 24 November it was high and variable. This is the sort of thing which makes me look for Es ...
I was getting good results on 10m WSPR ...
So I reckoned that the best propagation would be to the South, given the 10m results and the fact that what solar energy there is at this time of year is concentrated towards the equator. Any slight improvement to that background ionisation by the raised Xray levels and solar wind might cause a 6m opening. 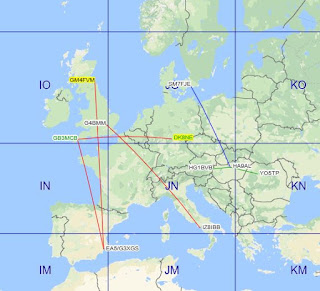 This was the only contact I had but it proved that the aurora warning was fairly effective in predicting Es. Not every contact is reported on DX Maps and no doubt if there had been other stations operational on the generally North/South axis I might have worked more.

The 10m opening continued for another hour or so.

These openings are frequently weak and often short, but they do prove that there is life on 10m, and sometimes even 6m, outside the enthusiastically supported Summer season.

With another warning of possible auroral activity on 1 and 2 December I tried again. The event proved to be too weak for auroral work here, with the wind speed over 400 but less than 500, and the Bz negative but in the range 2 to 5.
Just the formula for Winter Es 10m action ...

Nothing got high enough to worry anybody on 6m Es, and anyway, most 6m activity has switched to MSK144 for meteor scatter events (which is another subject, but covered in my last posting). Still, on 2 December the 10m event continued.
Maybe not as productive as the day before, but still hardly "the band is closed" as many think.

Sometimes I think that non-auroral events give me more fun that the full-blown ion-stripping magnetic blast of the Northern Lights at their most majestic. Anyway, a big event which causes auroral propagation often produces Es as it gets weaker, which all seems to be the same mechanism to me.

Anyway, more solar fireworks are predicted for around 4 January (possibility of Au and Es) due to several coronal holes, and this is a period which could coincide with raised barometric pressure (possibility of tropo) and a combination of weak patterns of meteor shower activity (possibility of meteor propagation). We shall see if this grand conjunction comes to anything, but a bit of 10m Es would satisfy me; anything more is a bonus.

It is very easy to blame everyone around you without checking your own contribution.

As with so many pet subjects, I have been banging on about this for years. The thing is, the task is never-ending. I can blame Mrs FVM's laptop. The power supply is surrounded by ferrites but the thing radiates directly. The upside of this is that Mrs FVM is more likely to respond to a request to turn the thing off than my neighbours.

I recently bought a new laptop myself. It has an i5 processor and a large quantity of nice fast RAM. Well it is not exactly new. It was second hand from eBay, quite a bit less than £150, and it came without a power supply. Bargains like this often come from company liquidations, one-off exercises and the like. I myself was involved with a one-off project where 1500 people were loaned lap tops for a three month period. The computers were then collected back up and appeared on the "almost new" market. Mine has a slight screen defect, but it was much less than a quarter of the new price.

Anyway, I also ordered a branded "original" power supply from an unknown site on eBay. In the past I have ordered these and they turned out to be unbranded copies which poured out interference, but the seller had always mysteriously disappeared when I tried to complain. This time it didn't even turn up and I got a refund. I run the "new" laptop on a multi voltage, multi plug general purpose PSU which make almost no noise. Anyway, the one that I had refunded turned up weeks later. Although it is branded it make a dreadful racket. Is it a fake? Who knows.

This story just reinforces my thoughts that you cannot expect to be noise-free. My own computers and screen make some noise and I try to minimise that. My central heating boiler makes a noise on 10m which affects the received signal on my FT-817 but not on my IC-7100. If you look at the design of various rigs some will be more inclined to suffer from noise than others, and as usual the degree of linearity will play a part (in both the susceptibility to noise and the price of the rig).

Noise is unavoidable but it is not incapable of being reduced. Regular readers will have read about my efforts with LED versus fluorescent lights, BT modems versus generic brands, cooker hood power supplies, USB leads of all sorts ... the process never ends. Nor should it. New devices appear in the FVM household regularly and there is always a dB or two to save. I don't automatically blame the neighbours because experience has shown me that the latest noise is ALMOST ALWAYS arising from within the FVM demesne.

For a while I have been wrestling with setting up some sort of network for the shack and office computers. This was wi-fi based but keeping the wi-fi dongles going despite Windows cheerful but destructive updates finally beat me. I also found it hard to keep the USB cables quiet. Several computers in a room should be wired for internet connectivity, or so my out of date thinking goes. The problem was that my last (also second hand) computer produced dreadful noise when connected to an ethernet connection. That computer has been stripped down to the mother board, fitted with a new processor, got up with new peripherals and power supply, and mounted in a new box. So everything was approved noise free except the one thing that changed, the motherboard.

Having left it on wi-fi for months while I cogitated on this issue, I decided that the ethernet socket must be at fault. After all, that was the story behind the BT modem. I bought a USB3.0 to ethernet link to allow the internet access to reach the computer via  a different route and first trials suggested that this made no difference.

After allowing all this to mature a bit further, I decided to move the internet access point closer to the computer and use a better quality ethernet cable. I chose a CAT 6 cable, well screened with metallised plugs and only 500mm long. This replaced a CAT 5 with plastic plugs which was 1.5m long. The result was remarkable. Not complete silence, but manageable.
I am beginning to wonder if all ethernet plugs and sockets are suspect. Next project is to screen the USB3 to ethernet converter using the "Bacofoil" method to see how that works.

It is worth it. I now have both radio computers linked via a wired connection which is not only quicker, it allows ShareMouse to work perfectly and allow me to use just one keyboard and mouse.

New sources of interference pop up all the time. Just moving a cable can cause problems. At the extreme I have turned off the house mains and run the radio on battery power to see if it was coming from within this house (in that case it was). A simple test is to listen to the radio while you turn off the suspect device and unplug the power supply. Most computers create some hash but some if it can be tolerable.

We have a general rule in this house the every device should be turned off at the mains if not in use. This extends to two "smart" TV devices. The policy also saves on the electricity bill. Simple ferrite filters work remarkably well. I have recently invested in a commercial mains filter as I have no other protection against common mode interference entering the rig power supplies via the mains. I doubt if this is a major issue but it seems worth being able to test it. And so the battle continues.
I guess that I may yet be affected by the sort of over-powering interference which has put other amateurs off the air. However, it will not happen until I have tried my best to carry on using my own best efforts and a few simple precautions.