Ah, the Autumn lull is (not) in full swing.

Time for a bit more on FT8. Why not, as everybody else seems to be talking about it?

In my last post about FT8 I outlined the theory which is believed to allow this mode (and others like it, JT65 is potentially better) whereby it works very well on weak signal which are otherwise undetectable. The idea is that low strength reflections are behind this weak signal propagation, with the aid of scattering.

I will repeat the diagram below .. 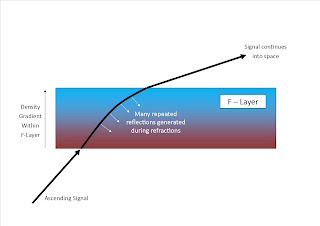 It is worth pointing out that there needs to be some refraction for the reflection to occur. If there is no F-layer, there is no refraction, and no reflection either (though there may be some scattering). If there was no F-layer at all, such as a night during solar minimum, the signal will proceed into space with no deflection and the band is really shut.

The point here is that this type of propagation can only extend the openings before and after full refraction takes place. Or possibly when the MUF does not quite reach the band you are working on. What it will not do is cause a band to open when there is no F-layer present. In other words, it is not a magical solution to make QSOs which are otherwise impossible.

So how can I put this information to use? Well, F-layer ionisation is always stronger towards the equator. This is a simple product of geometry. The MUF is usually lower towards to poles (i.e. Scotland does badly of course). So it might be worth trying to work stations towards the equator. Even in Autumn, when the conventional logic is that there is nobody to work on 10m at this time of the cycle, there might be some stations to work. So I tried this briefly on 10m.
I was happy with this result as 10m is not a band I concentrate on. Morocco and Gabon are new countries on 10m for me, and Angola would have been too except that the station was /MM (i.e. maritime mobile) and floating off the coast. Still I am not complaining and I have been hearing stations from South Africa, Brazil and the Falkland Islands too.

There is nothing especially new about North-South paths at this time of year as my results in previous years on JT65 show, but FT8 makes it all easier. Certainly I see contacts on the cluster on FT8 when there are none on SSB, PSK, RTTY and all the less efficient modes, which may also be due to FT8's sudden popularity.

They certainly look like F-layer, as there was no Es at those times and I am too far North for Trans-Equatorial (and so are they).

What annoys me is that when I speak to some local stations about all this they are amazed. "But there is no point going on 10m in the Autumn (or Winter, or Spring, or during Solar Minimum, or any other imagined rule)." In doing this many amateurs are behaving in the manner of those little animals the Lemmings, which are supposed to be so keen to follow their leader that packs of them commit mass suicide in their thousands by following the leader off the cliff top.

In many senses a lot of amateurs seem to be like Lemmings (or at least the imaginary Lemmings which are supposed to blindly follow their leaders). These amateur Lemmings read or hear that there is no point coming on 10m during the sunspot minimum, that Es is caused by the Jet Stream, or that VHF is pointless apart from during the Es summer and two weeks at New Year. Or they believe any other crackpot notion. In fact any other imagined rule that some "bigger man" has made up. And they believe it, without testing the rule for themselves.

These poor folk have been told not to bother, so they don't call CQ. They quickly find that if they do not call CQ then their prediction comes true: nobody calls them. Or even better, they do not bother to turn their radio on at all, which makes us all poorer. For the Lemming Amateur, not turning on the radio is the ultimate proof that there is nobody to work.

It just makes me wonder how not turning on helps anyone.

Lemmings may be daft as a balun, but even Lemmings are curious.

When I write in this blog I try to stick to the observable facts at this QTH. In other words, if it doesn't work here I say so, but that might not be true for you. I hope that you to have a questioning mind, that you are inventive, doubting, and you try things out. I might have something interesting to say or not, but you decide that. Don't just believe me (or anyone else). And it cuts both ways. Don't tell me that I am wrong if it works for me but doesn't work for you. Maybe we are both right. In my experience, one size does not fit all when it comes to radio science.

Don't be a Lemming Amateur. My advice = Check things out yourself.

Check it out. Do not believe that 10m is no good at solar minimum. Give it a go. Or just think about it and maybe work something else out yourself. My Granny Reavey used to ask me "if somebody told me to put my hand in the fire, would I do it?" Of course not. I am not sittin' on the dock of some bay, watchin' the tide roll away. So when somebody tells me that 10m or VHF is useless during the Autumn, I not only try to make up my own mind, I prove them wrong too.

Here are the last 2 weeks on 6m:-
Given that this is the first two weeks in October, and all of it is 50MHz Es, it looks quite contrary to the expectations. Not what you read about in books. However, you will have read it here before. Each of these openings was associated with a small up-tick in the X-Ray levels reaching the Earth from the Sun.
There was another one the next day:-
I could take quite a few other examples. Each time, a small blip upwards, even in just the low energy X-Ray readings, is enough to flip the Es on, and there are useful QSOs to be had on 6m. 9A4ZM and I tried on 4m too, but it was not strong enough at that moment.

Every year I use these transient effects to work Es well into the winter. Perhaps I should just shut up about it. As the Lemming Amateurs have never heard of it, they leave me alone.

Please keep it between the two of us.

Just you and me (and the DX of course).

What I called "geomagnetic disturbance short of an aurora" has a similar effect. Today (14 October) the long but rather weak effects of a Coronal Hole High Speed System (number 34 on the chart) is still having an effect after three days.
It has produced a nice Es opening into Italy, Fance and Spain on 10m and 6m so far today. 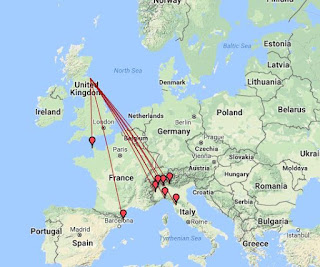 Anyone who thinks that Coronal Holes are only good for auroras needs to think again. They are very good for Es as well, especially towards the end of their activity periods.

Better not tell the Lemmings or they might turn on their radios in October.

I wouldn't want to shock them. The propagation predictions told them it was not worth turning on ... for me it was worth turning on.
====================================
I have been busy with the advanced possibilities opened up by FT8. However, without a sked partner somewhere in mainland Europe I have to be content with regularly tripping people's receiving bots, which log my signals into the DX Cluster. It can be a lonely business ,,,
This is just my fantasy here, but I bet that this is not the only path open on 6m in Europe at that time. The Lemmings have decided that October is not a good month for 6m, so they are not around to hear me. Just that one automated bot is there, or others if I beam in other directions. It does get a bit tedious. I know that if there was anyone around who could transmit FT8 I would have a QSO, but there is nobody there.
=====================================
Just as a quick update, I have got the Messi and Paoloni Hyperflex co-ax installed on the 6m antenna, and I took the chance to re-install the 5 ele 50MHz yagi as a temporary measure (I need the help of 5 elements for this low signal strength FT8 stuff).

I have taken down my 2m and 70cm vertical as most of the amateurs I used to work on that have gone SK of late. There are now only 3 stations active on FM near me, so 4m FM is enough to reach those individuals. I have re-sited the 4m vertical rather lower down, but it makes little difference given the reduced amateur population. I have stopped listening on 2m FM, as there is nobody there. This frees up the Wouxun 950 multiband rig for the car and puts the single band Anytone 588 back in the shack, which seems like the best arrangement.

The 6m stub filter in my 4m line needs attention and I intend to replace it with an LC filter. I mentioned this before when the 4m stub in the 6m line also went intermittent, so it it time to do something. At some stage I also have M&P Hyperflex for the 4m and 2m horizontal antennas.

I am using updated versions of WSJT-X and MSHV, more of which anon. I have also been comparing Pi-RX and MSHV for decoding PI4 beacon mode. No firm conclusions there yet.