Fibre broadband to cabinet arrived in Ayton a few months ago. For those unfamiliar with the UK terms this means that whereas before we had fibre broadband connection between the local telephone exchange and the Internet, it is now possible to opt at extra cost for our broadband connection to be in optical fibre right the way to the cabinet at the bottom of our street. That is much closer than the telephone exchange.

The distance from here to the cabinet is about 100m, and that is always going to be sent along the copper wires installed underground 30 years ago for the telephone line. That installation dates from the time this house was built. The distance between the cabinet and the exchange is over 1km, so the reduction in the proportion of old copper connection in use is worth having. The claimed (and claimed is all it is) difference in broadband speed this would bring is from 8 MB per second to 38 MB per second. That seemed worth having, so I decided to go for it.

The deals on offer were interesting. Our provider was BT Broadband. They had given a good (but expensive) service on the 8 MB service, after several years of miserable speeds from AOL Broadband (provided by Talk Talk). Whilst Talk Talk offered 8MB but provided 2MB, BT offered 8MB and generally provided it.

By the time of my review, BT was charging as much for the 8MB service as would buy me 38MB fibre broadband with 4 times the monthly download limit. So there was no contest really. John Lewis Broadband was offering higher speeds and higher limits for the same money, so they got the business.

Of course the equipment except the router, and the line, is provided by another branch of BT, BT Openreach. The John Lewis Broadband is provided for them by PlusNet, which is owned by  .... BT. So I am going from BT Broadband to BT Fibre Broadband via two other providers, and getting it for less money. Don't ask me to explain. My business background makes me think that BT should be forced to sell BT Openreach, but never mind about that.

On the run up to switching away from BT Broadband I was bombarded by phone calls and emails threatening all sorts of money I would lose by leaving them, all of which were wrong. So I was reluctant to answer the phone the day before the change, but it was BT Openreach checking that I would be in for the BT Openreach technician (actually a contractor for another company) to come and fit the box at my end.

The Openreach fitter phoned the next day saying that he was at the cabinet and would be with me soon, and he was true to his word. Whilst he got the line running, he could not get the router working nor get Internet access on the new fibre connection, so he left. The John Lewis helpline sorted it eventually. After they told me to turn the router off and turn it back on again (I had already tried that, but theirs was the crucial intervention).

So a successful if not exactly trouble free start. They say I should wait a week before testing the speed, which I will do.

However, on the radio side all hell broke loose. First of all I found quite a bit of noise coming from the switching power supplies of the router and modem. I have come to expect this and I have cut it down using clamp-on ferrites. I will sort it eventually, but there was also a howling tone on 6m and 4m. Also on 2m there was enough signal to make a 59 report on 144.350 and sporadically on 145.500 (unfortunate frequency choices really).

After a few tests, turning off either the Netgear router or the BT Openreach modem stopped the noises. Then, leaving them both on, but disconnecting the ethernet cable between them stopped the noise. The cable was supplied with the Netgear modem and is marked CAT  5E. It looks very cheaply made. I substituted my own CAT 5 cable and the noise got much WORSE. I then noticed that the noise was less if I left the cable vertical rather than horizontal. I then dug out an old CAT 5 cable which is 5 metres long, and draped it down, along the ground, and then up again. This reduced the noise to manageable levels.

Although it seems to be coming from the cable, some of it may still be coming direct from the modem. It certainly seems to be worse when the LAN led is on. Moving the router about seems to alter it, and I think that is the effect of changing the cable to vertical, but it might also be the router. 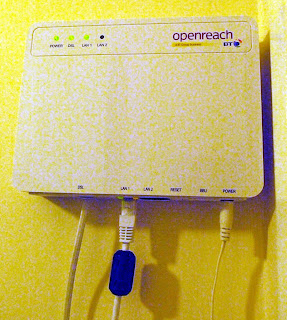 I did put a ferrite on the long ethernet cable, but I doubt if that will do much. I suspect that the variation between the cables is down to the degree of screening. So I have ordered a "CAT7" screened cable of the type I use with the IC-7100. I will be interested to see who that changes things, if at all.

It seems that CAT7 is not an agreed specification, but the CAT7 cable I use for the Icom seems to be pretty well screened, which might be the main thing.

I still have an open mind about what is to blame here, and we shall see how it pans out. In the longer term I expect to change the £20 Netgear router supplied by John Lewis for something better. Whether the new cable will make a difference I am not sure. The gear is around 10 metres from the 4m antenna and 20m from the 2m and 6m antennas - and about 10m difference in height as well. I think that siting will be important.

Anyway, just what I have come to expect. Latest technology is often incompatible with good old radio.